We regret to inform readers that the rampaging scourge of “cancel culture” has struck home this weekend in Colorado politics. Word of this sad development comes to us via former GOP Secretary of State Scott “Honey Badger” Gessler, who is running to be the next chairman of the Colorado Republican Party and reports via Facebook that he himself is the victim of this crime:

So yesterday I got cancelled!

Jaws agape with faux indignation, we read on:

MailChimp refused to send out my email for the Colorado GOP chairman’s race, because it talked about election integrity. [Pols emphasis] We need to fight back against this outrageous, anti-speech control. How? First, NEVER use MailChimp for your email services…

You guessed it, folks! Scott Gessler ran afoul of commercial email provider MailChimp’s policy, which they are of course perfectly entitled to, against letting their private platform be utilized to spread seditious bullshit about the 2020 elections. Now, for those of us who know Gessler from his years-long campaign claiming without evidence that “tens of thousands” of people voted illegally in Colorado elections in the early 2010s, which ended in such embarrassing failure that it helped sink Gessler’s primary bid for governor in 2014 as even most fellow Republicans considered him toxic, this comes as no surprise. 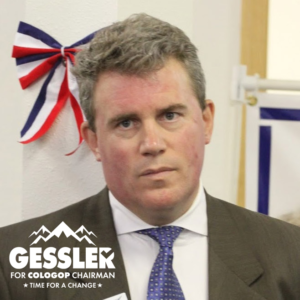 But because we are eminently fair in this space, here’s an excerpt from the missive that failed to pass MailChimp’s muster:

But there was almost no time to investigate after the election, and nearly every court dismissed the election lawsuits without looking at the evidence. If a special counsel could spend over $20 million and 18 months investigating the Russia Collusion Hoax, why can’t we meaningfully investigate election fraud? I believe that a full and complete investigation will prove widespread election fraud. And maybe even show that President Trump rightfully won the election! [Pols emphasis]

And, well, yes, after reading these two paragraphs of Rudy Giuliani hair dye dribble we do have a good sense of why MailChimp declined to allow their private commercial platform to be used to send it to thousands of Republicans in Colorado! Scott Gessler, whose bogus crusade against non-existent illegal voters flatlined his political career six years ago, is fully back in 2021 as a Donald Trump “dead-ender,” on the lam like other Trump legal luminaries Sidney Powell, Lin Wood, and yes, Colorado’s own Jenna Ellis from the big bad censorious world of facts and evidence and critical thinking.

Where Rep. Ken Buck tried to back Colorado Republicans away from Trump’s toxic election disinformation, Scott Gessler–and for that matter his principal opponent in the race for Colorado GOP chair–are in full embrace of Trump’s “Big Lie.” For Gessler, it’s the continuation, or more accurately a resurrection, of a decade-long campaign to pretend Republican electoral defeats are illegitimate. This is, among other things, very bad for Republicans who would like to reckon honestly with their problems.

We’re sorry to say, MailChimp can’t stop Gessler from becoming the next chairman of the Colorado GOP.