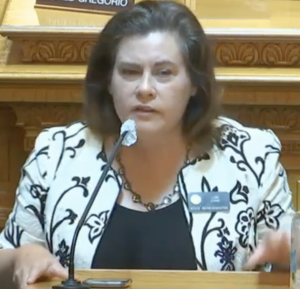 Yesterday, as readers know, the Legislative Audit Committee in the Colorado legislature convened at the request of outgoing GOP Rep. Lori Saine to hear “expert testimony” on whether elections in Colorado–carried out in 62 of 64 counties on Dominion Voting Systems hardware–were somehow not free and fair, in so doing supporting the contention by outgoing President Donald Trump, also without evidence, that the recent elections across the nation were rigged.

We predicted yesterday before the hearing “there is a 100% chance that this silly spectacle will accomplish precisely nothing other than making Republicans look like fools.” And as the Colorado Sun’s Jesse Paul recapped afterward, we were right:

There was no evidence of widespread voter fraud in Colorado presented during a day-long, legislative hearing held by Republicans Tuesday on the state’s election integrity. But there was plenty of bipartisan praise for Colorado’s voting systems and processes… [Pols emphasis]

[GOP Rep. Lori] Saine, who lives in Firestone, told The Colorado Sun before the meeting that she called for it after hearing concerns from constituents. “You’ve got certain states with election integrity issues,” she said last week. “But did it happen here in Colorado? It’s really kind of on us to help answer that question. Did it happen here? Did we have widespread fraud?”

The resounding answer from county clerks, Republican former Secretary of States Scott Gessler and Wayne Williams, and even Jenna Ellis, a top attorney for Trump, was no.

In what can best be described as a bizarre anticlimax, instead of raising any legitimate concerns about Colorado elections, fellow Republicans in yesterday’s LAC hearing helped Democrats shut down baseless speculation about the reforms passed in 2013 that have given our state one of the consistently highest rates of voter participation. And when it came to the dreaded Dominion Voting Systems hardware used by almost every Colorado county this year? As Colorado Public Radio reports, former GOP Secretary of State Wayne Williams, under whose leadership Dominion was chosen, was unusually direct:

“I can state that in Colorado, our voting systems accurately record the votes of every Coloradan and we’ve proved it with respect to Dominion 868 times,” Williams told the committee. He also added that in Georgia, which also uses Dominion technology, the results held up after a full hand recount.

“There is no one in Moscow, nobody in Beijing, nobody in Antifa, nobody in the Trump campaign that has changed a single ballot in the state of Colorado [Pols emphasis] because you physically can’t do that unless you broke into the clerk’s office, you bypass the cyber locks,” Williams said. “You somehow circumvented the 24-7 video surveillance and the security protocols that are in place.”

It’s just stunning to us how far-right Republican legislators with a clear interest in spreading a false narrative of a stolen election not only failed to accomplish that, but in fact actively helped dispel the unfounded claims Donald Trump is reliant on to keep his base’s anger at full tilt. Former GOP Secretary of State Scott Gessler, who supplied “expert testimony” in one of Trump’s failed post-election challenges in Nevada, said “Dominion has generally performed very well.” Gessler complained about certain other issues like signature verification, and actually suggested that voters should be fingerprinted. But no one–not Gessler, not even Trump’s credibility-free Colorado resident attorney Jenna Ellis, could come up with an allegation of fraud in Colorado–let alone evidence of fraud.

And that left us wondering once again: what the hell was the point of any of this? Rep. Lori Saine, Rep. Dave Williams, Ellis, Gessler, and so many other Republicans who participated in this day-long WebEx spectacle were not there to debunk Trump’s voter fraud conspiracy theory mythology, just the opposite–but in the end that is overwhelmingly what the content of the hearing served to accomplish.

Thanks, we guess? President Trump, who you can bet was paying attention, cannot be thankful.