Get More Smarter on Friday (February 12)

Midday Tuesday: That’s when temperatures in the Denver Metro area are expected to get back ABOVE freezing. Let’s get even more smarterer before our brains get all icy. If you think we missed something important, please include the link in the comments below (here’s a good example). If you are more of an audio learner, check out The Get More Smarter Podcast. And don’t forget to find us on Facebook and Twitter.

As she made her case Thursday that former President Donald Trump must be convicted by the U.S. Senate for inciting an insurrection, Colorado U.S. Rep. Diana DeGette replayed and read aloud the words of Trump supporters who rioted at the U.S. Capitol on Jan. 6.

“Their own statements before, during and after the attack make clear: the attack was done for Donald Trump, at his instructions and to fulfill his wishes,” said the Denver Democrat, a prosecutor in Trump’s second impeachment trial. “Donald Trump had sent them there. They truly believed that the whole intrusion was at the president’s orders and we know that because they said so.”…

…Neguse, a Lafayette Democrat, gave a nine-minute speech late Wednesday afternoon. He attempted to pre-emptively cut down arguments from Trump’s lawyers that the former president’s remarks on Jan. 6 were free speech protected by the 1st Amendment.

“No president, no matter their politics or the politics of their followers — conservative, liberal or anything else — no president can do what President Trump did,” Neguse said. “Because this isn’t about politics, it’s about his refusal to accept the outcome of the election and his decision to incite an insurrection. There’s no serious argument that the 1st Amendment protects that.”

Colorado Public Radio has more on Thursday’s performances from DeGette and Neguse.

Impeachment 2.0 now shifts to the defense of former President Trump from his bumbling batch of lawyers. The front page of CNN summarizes the defense team’s approach pretty simply: 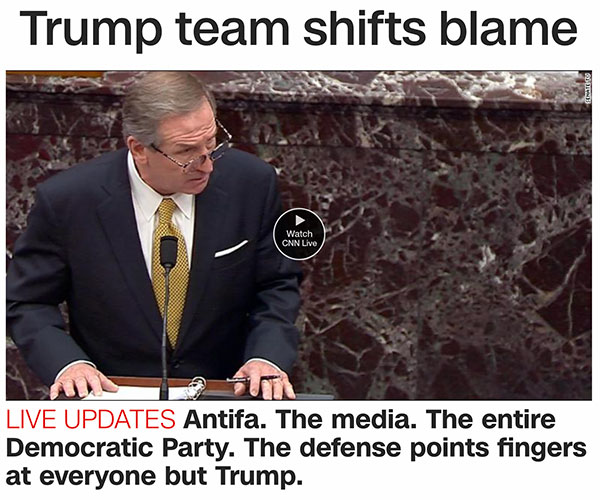 Senate Republicans appear to be largely unswayed by compelling arguments made by the House impeachment team — including evidence that former President Trump knew full well that Vice President Mike Pence was under siege when he sent a threatening Tweet. Many of the GOP Senators are not even bothering to pretend that they are paying attention anymore.

► As The New York Times reports, federal prosecutors charging members of the Oath Keepers militia movement say that the members themselves claim to have stormed the Capitol on Jan. 6 at then-President Trump’s behest:

The new accounts about the Oath Keepers’ role in the Capitol assault came on the third day of former President Donald J. Trump’s impeachment trial and included allegations that a member of the militia group was “awaiting direction” from Mr. Trump about how to handle the results of the vote in the days that followed the election. “POTUS has the right to activate units too,” the Oath Keepers member, Jessica M. Watkins, wrote in a text message to an associate on Nov. 9, according to court papers. “If Trump asks me to come, I will.”

This seems like a relevant point for Republican Senators to consider as they ponder impeachment questions. But if you are the betting type, it would still be hard to put money on the GOP doing anything other than looking the other way.

► It’s amazing what you can get done when you have a President who actually knows what he’s doing. As The Washington Post reports:

President Biden said Thursday that his administration had finalized deals for another 200 million doses of the two coronavirus vaccines authorized in the United States, giving the country enough vaccine by the end of July to cover every American adult.

In remarks capping an afternoon tour of the National Institutes of Health, Biden said the federal government had purchased 100 million more doses from Pfizer and German company BioNTech, as well as 100 million more from Moderna, using options built into existing contracts with those companies.

The announcement was the centerpiece of an emotional address from Biden, who made a point of speaking through his mask as he called it a “patriotic responsibility” to wear one.

The United States will now have about 600 million vaccine doses by the summer, which is enough to vaccinate every American with the recommended two doses.

► Congresswoman Lauren “Q*Bert” Boebert (R-ifle) loves to talk about “law and order”…just as long as the conversation isn’t about her or her COVID hotspot eatery, “Shooters Grill.”

Meanwhile, The Grand Junction Daily Sentinel picks up the thread of Boebert paying off $20k worth of liens at around the same time she wrote herself a $21k mileage reimbursement check from her campaign.

► Nearly 10% of Denver residents have received at least one dose of the COVID-19 vaccine. Major retailers such as Wal-Mart and King Soopers will soon be offering the vaccine to customers.

► As Dana Milbank writes for The Washington Post, Republican Senators who vote to acquit former President Trump on charges of inciting an insurrection had better be willing to own any violence that follows:

House impeachment managers closed their prosecution Thursday with a warning to Republican senators: If they vote to acquit former president Donald Trump, the blood will be on their hands when he unleashes political carnage again.

“When” is the proper word, for, given Trump’s long pattern of inciting violent threats and actions, the next brutal outburst is not a question of “if.”

“If we don’t draw the line here, what’s next?” Rep. Jamie Raskin (D-Md.), the lead impeachment manager, asked the senators. “Is there any political leader in this room who believes that, if he is ever allowed by the Senate to get back into the Oval Office, Donald Trump would stop inciting violence to get his way? … If he gets back into office and it happens again, we will have no one to blame but ourselves.”

It has been five years since Trump marveled at his own ability to incite. “I bring rage out,” he told The Post’s Bob Woodward and Robert Costa. “I always have.” And, as Raskin and his colleagues outlined, Trump brought rage on a grand scale.

► The Biden administration reversed a late Trump-era order that would have severely weakened the Land and Water Conservation Fund (LWCF) funding bill that former Republican Sen. Cory Gardner kept crowing about in 2020.

► Senator John Hickenlooper (D-Denver) is acknowledging that he made a mistake in voting for an immigration-related amendment during last week’s “vote-a-rama” on the stimulus bill.

► As CBS4 Denver reports, state lawmakers plan to work on improving the state’s unemployment system when the legislature reconvenes on Tuesday.

► Colorado lawmakers will also consider a bill to limit the amount of personal information that ends up getting disclosed to Immigrations and Customs Enforcement officials.

► Larimer County is offering work-from-home employees up to $1,700 to help offset costs of equipping a home office.

► Colorado’s drought numbers are still looking bad despite some recent snowfall and with more expected to come this weekend. Meanwhile, the Colorado Avalanche Information Center is warning that this could be the worst season for avalanches in a decade because of low snowfall totals.

► Congress will soon shift its attention back to finalizing a big COVID-19 relief/stimulus package that may be one of the most popular pieces of legislation in modern American history.

► POLITICO magazine profiles former South Carolina Gov. Nikki Haley, who wants to run for President in 2024 but may not be able to extricate herself from her association with Donald Trump.

Unless you’re a Keystone XL worker or unborn baby. https://t.co/iTd6FLpaUG

► It’s a good guess that someone on this Littleton HOA Board is named Karen.

► Here are some of the key video highlights presented by House impeachment managers on Wednesday, featuring never-before-seen footage of the Jan. 6 attack on the U.S. Capitol: