Get More Smarter on Thursday (December 3)

According to the Urban Dictionary, beautiful people are always born on December 3. We can’t even pretend to explain this one. If you think we missed something important, please include the link in the comments below (here’s a good example). If you are more of an audio learner, check out The Get More Smarter Podcast. And don’t forget to find us on Facebook and Twitter.

► The Colorado legislature concluded a three-day special session on Wednesday with plenty of success. As Colorado Public Radio reports:

The Colorado state legislature finished up a three-day sprint of lawmaking on Wednesday afternoon, passing a series of bills meant to throw a lifeline to businesses and families as the coronavirus pandemic surges.

“This is not the end of the conversation. There’s more that the federal government needs to do. And yes, there’s more that the legislature will be able to talk about when they convene,” said Gov. Jared Polis. “But you know what? This is going to help a lot of people and small businesses get through the next couple months.”

All told, lawmakers swiftly approved some $342 million in coronavirus aid packages for small businesses, housing relief, and public health response efforts (among others). The CPR story has the full list of legislation approved in an overwhelmingly bipartisan manner.

You can read more from The Grand Junction Daily Sentinel, The Denver Post, and Denver7.

There have been a lot of low moments for democracy over the past four years, but none that reached quite as low as what happened on Wednesday afternoon: The release of a 46-minute rant by the President of the United States aimed at undermining the election results.

I’m not going to reproduce any of the myriad lies and conspiracy theories Trump leaned on in the address, which he opened by grandiosely declaring “this may be the most important speech I’ve ever made,” because, well, that’s exactly what the outgoing President wants. He wants the media to report on what he said and, in effect, launder the lies so that they come out looking somehow new or more relevant. (And some media outlets will do just that! Conservative stations and publications will cover this speech like a legitimate presidential address, repeating the debunked junk coming out of the President’s mouth like it is actually up for debate.)

What Trump is doing here has moved beyond laughable or embarrassing. It is now into the downright dangerous phase…

Trump’s move to throw the power of the presidency behind disproven claims that seek to actively undermine the very idea of safe and fair elections and the peaceful transition of power creates a clear moment of choosing for elected Republican leaders who have, by and large, stood by silently as he has made his increasingly outlandish claims about what happened on November 3.

We’re certainly not holding our breath waiting for more high-profile Republicans to speak out against Trump’s ridiculous claims of election fraud, but we won’t fault you for holding out hope. Philip Bump of The Washington Post offered a very succinct reaction to Trump’s diatribe:

► Colorado Republicans, meanwhile, are trying to put election fraud claims back in the box. You might remember that State Republican Party Chairman Ken Buck demanded an investigation into already-debunked claims about fraud in Colorado’s mail ballot process.

► As Sandra Fish writes for The Colorado Sun, state and local officials are putting the final ribbon on the 2020 election:

All but one of the state’s 63 counties [sic] certified their election results last week. Gunnison County experienced a delay after elections officials contracted COVID-19 and expects to certify results this week.

The Secretary of State’s Office will certify the statewide results as soon as an automatic recount for district attorney in the 18th Judicial District is completed. That recount began Tuesday and must be completed by Dec. 8 but is expected to finish sooner.

Initial results in the 18th JD showed Republican John Kellner with a lead of less than 1,500 votes over Democrat Amy Padden. Both candidates are hoping to succeed “The Magnificent Putz“ in a district largely composed of Arapahoe County.

► The United States set two awful records on Wednesday: For the first time, we surpassed 200,000 new daily coronavirus infections and 100,000 COVID-19 hospitalizations. Robert Redfield, the director of the Centers for Disease Control and Prevention (CDC), warned Wednesday that the worst is still yet to come, warning that the U.S. death toll could reach 450,000 by February. Redfield predicted that the next three months are “going to be the most difficult time in the public health history of this nation.”

► Dr. Anthony Fauci, the nation’s foremost infectious disease specialist, will apparently not have to worry about looking for a new job under a Biden Adminstration:

This news should be fun for Congresswoman-elect Lauren “Q*Bert” Boebert: 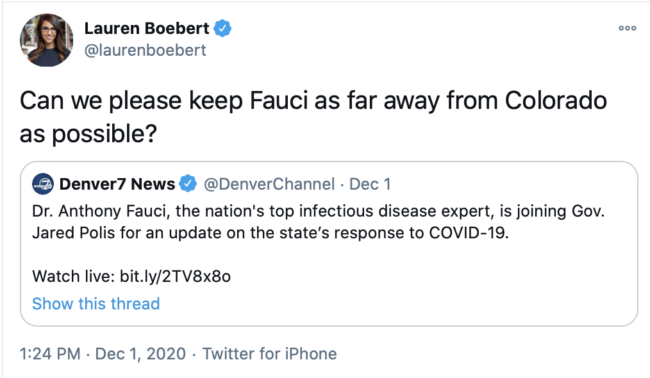 ► Congressman Joe Neguse (D-Boulderish) is calling for the United States to rejoin the Paris Climate Accords and to create a national biodiversity strategy. From CPR:

On Wednesday, Congressman Joe Neguse introduced a resolution calling for a national strategy to address the crisis. The Boulder Democrat wants the incoming Joe Biden Administration to prioritize biodiversity by rejoining the Paris climate agreement and setting a goal to conserve 30 percent of United States lands and oceans by 2030.

“The decline of biodiversity crisis presents a real, direct threat to the security, health and well-being of our communities and our planet,” Neguse said. “That’s why it’s clear we need a coordinated, whole-of-government effort to tackle these issues.”

► Congresswoman-elect Lauren “Q*Bert” Boebert has a habit of playing dumb when confronted with information about any illegal or improper acts, but that excuse isn’t working so well anymore. As 9News reports, Boebert’s campaign says it is working to fix some pretty obvious errors in its campaign finance reporting.

► President Trump is said to be really mad at Attorney General William Barr for not uncovering the massive voter fraud that doesn’t exist.

And then there’s Wisconsin Republican Sen. Ron Johnson, who is demanding proof that voter fraud did NOT occur. This is exceptionally dumb.

► Former Trump attorney and all-around nutter Sidney Powell told Trump supporters in Georgia to boycott the January 5 Senate runoff elections in protest over nonexistent fraud. Republicans will lose control of the Senate if the two Democratic candidates are elected next month.

POLITICO has more on the legal circus presided over by Powell:

Sidney Powell released the Kraken. And it turns out the mythological sea beast can’t spell, is terrible at geography and keeps mislabeling plaintiffs in court.

A congressional candidate Powell claimed to represent in one lawsuit said that, in fact, he had nothing to do with Powell or her quixotic effort, which she dubbed “the Kraken,” arguing the election was stolen from President Donald Trump. An expert witness cited in another suit named a nonexistent county in Michigan. A Wisconsin lawsuit sought data on alleged irregularities at a voting center in Detroit, which is in Michigan. And a filing in federal district court signed by Powell misspelled “district” twice in the first few lines.

The sloppy mistakes aren’t just a sideshow, despite Powell’s quip on Twitter when a POLITICO reporter took note of the mangled words: “No extra charge for typos.” Judges also have been flummoxed by the procedural moves and errors committed by Powell, who was booted from Trump’s legal team in November but still is crusading to overturn the election results.

► Since we’re on the topic of legal geniuses associated with the Trump campaign, check out this The New York Times profile of Trump attorney Jenna Ellis. It is not flattering:

Jenna Ellis broke into the legal profession in 2012 as a deputy district attorney in Weld County, Colo., a largely rural area that would soon make headlines for a failed attempt to secede from the rest of the state because some residents resented the growing dominance of more liberal communities to the south like Denver. Ms. Ellis prosecuted crimes like theft and assault, felonies of a different magnitude from the claims of sweeping fraud and criminal conspiracy she makes today as a top lawyer to President Trump.

It wasn’t long before she parlayed her law degree and experience as a prosecutor into jobs that thrust her beyond her corner of the state: She took a position with James Dobson, the evangelical heavyweight, joined the faculty at Colorado Christian University and started appearing on Denver radio as a legal commentator.

By late 2018, regular viewers of cable news would come to know Ms. Ellis as a “constitutional law attorney” — her preferred title — who aggressively came to Mr. Trump’s defense as he faced investigation and impeachment.

But a review of her professional history, as well as interviews with more than a half-dozen lawyers who have worked with her, show that Ms. Ellis, 36, is not the seasoned constitutional law expert she plays on TV. [Pols emphasis]

Ellis is rumored to be considering a run for Colorado Secretary of State in 2022.

► Democrats have selected New York Rep. Patrick Maloney to head up the DCCC in 2022.

► Facebook says it will remove misleading and/or inaccurate information on its platform about COVID-19. And it only took them 9 months!

► Vox.com makes it clear, once again, that there is really one person responsible for Congress failing to get anything done on a new coronavirus relief package: Senate Majority Leader Mitch McConnell. No stimulus for you!

► If the Karens of the world joined together and voted for a leader, the frontrunner would be Michigan wackadoodle Melissa Carone.

► Here’s one way to be sure that Democrat Joe Biden is the President-elect: Senate Republicans are suddenly very concerned about the national debt after spending like drunken sailors for the last four years.

► Check out the latest episode of The Get More Smarter Podcast, featuring an interview with Sulita Sualau and Ron Ruggiero of SEIU Local 105: