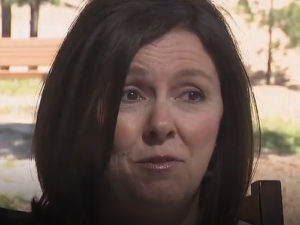 We’ve had plenty of opportunities this election season to revisit the moment four years ago when Sen. Cory Gardner showed intraparty courage not seen before or since: when he declared “I cannot and will not support someone who brags about degrading and assaulting women” and vowed to write-in Mike Pence for President of Donald Trump did not withdraw from the 2016 presidential race.

Gardner was certainly not alone in washing his hands of Trump in 2016, as Colorado Republicans high and low made the transition from subverting the state assembly in favor of Ted Cruz to falling in line behind their undesired nominee–and then investing their futures in the unlikely President-elect once he prevailed against the odds. Back in May of 2016, as it became clear that Trump was headed to inevitability as the GOP nominee, local Republican operative Laura Carno, now the semi-pro mouthpiece of GOP congressional candidate Lauren Boebert, was very frank about the unpleasant choice before her:

[T]he two frontrunners, Hillary Clinton and Donald Trump have record negative poll numbers among primary voters and among general election voters. The President we wish we had is never coming. [Pols emphasis] So what is a responsible registered voter to do?

…Do whatever you need to do at the top of the ticket. [Pols emphasis] Then look at what you can do to provide a check and balance to the next occupant the Oval Office, regardless of who that is. The President is one person —a powerful person— but just one person. There is much more you can do.

Something tells us this is not the advice being given by the Boebert for Congress campaign today! Boebert is running almost entirely as a MAGA placeholder, and mutual admiration with Trump is what largely substitutes for Boebert’s qualifications–that, and the cloying infatuation of a certain editorial board editor. If you’re voting for Lauren Boebert, we’re willing to guess that 99 out of 100 of you are also voting for Trump. And means you aren’t looking for Boebert to provide any kind of “check and balance,” unless a disaster far greater befalls the Republican ticket.

Past disdain for the leader they must now follow to the bitter end is a skeleton lots of local Republicans have in their closet (see: Gardner, Cory). Each will sort their own way through it on the morning after, some having paid the highest political price.