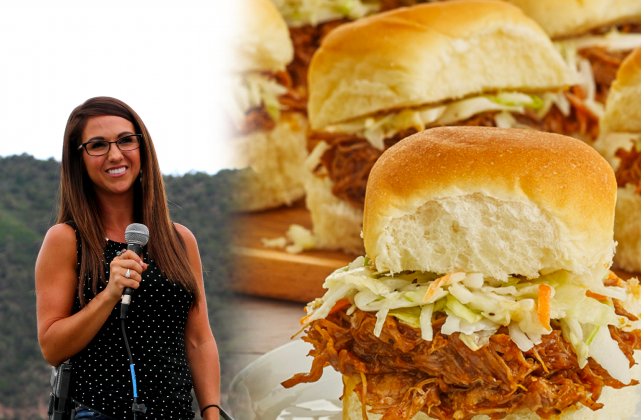 The Grand Junction Sentinel’s Charles Ashby has up today one of the more thorough bio pieces we’ve seen so far on Lauren Boebert, the upstart QAnon-curious Republican nominee for red-leaning CD-3 who shook Republican politics in western Colorado hard by handily defeating longtime incumbent Rep. Scott Tipton in the June 30th Republican primary. Ashby tries to substantiate Boebert’s backstory as she tells it to voters, a Democratic “welfare state” child who learned later in life once she moved to the Western Slope to pull herself up by her own bootstraps and earn her own piece of the American Dream. But stuff doesn’t appear to always add up:

Lauren Boebert, the Republican candidate for the 3rd Congressional District, may not have grown up in the downtrodden Democratic household that she’s so often been claiming…

We’ve already commented on Boebert’s story about eating “government cheese” as a child as pretty substantially off her message, so to find out it’s probably fictional just makes it all the more inexplicable. A hardscrabble upbringing is not a political disadvantage, of course, but it’s always better to go with the real story instead of making stuff up–even if the real story is, you know, boring. In Boebert’s case, her mother was actually a Republican when she was a kid, though she appears to have switched parties after (and back again, reports Ashby). Boebert claims she grew up under “complete control that the government had over us,” and it’s relief to know that this was made up since we all live in the same America.

There’s a lot to unpack in this feature-length story, from Boebert’s various arrest and court records to her history operating the Shooters Grill and the “Smokehouse 1776” food service operation blamed for sickening dozens of rodeo patrons in 2017–make sure you click through and read everything. There is one part of Boebert’s bio that merits a little additional discussion:

She said she later got her GED, a high school equivalency degree, but never has said when…

According to two Pueblo retired military veterans who have formed a political action committee opposing Boebert’s candidacy, the congressional candidate didn’t actually get her GED degree until May of this year, [Pols emphasis] about a month before the June primaries and five months after entering the race.

That group, RuralColoradoUnited.com, says it’s been looking into Boebert’s background and is troubled by what it sees. The group was formed by Pueblo residents George Autobee and Stephen Varela, who describe themselves as combat veterans.

“Nothing about Lauren’s story is true,” Autobee said in an email. “She is not who she says she is. She has had multiple failed businesses, doesn’t pay her taxes, breaks the law frequently, and will do or say anything to get in the spotlight. She has told countless lies on the campaign trail, and we cannot afford this circus in Congress.”

This is where the conversation gets a little delicate, since no one wants to unfairly denigrate people who haven’t enjoyed a traditional path to adulthood. In Lauren Boebert’s case, she dropped out of high school to have a child. That’s hardly a unique experience, and not in itself disgraceful in any way. But if it’s true that Boebert only went back for her GED this past May, months after getting into the race for Congress, and has been deceptively vague about this, it is undeniably damaging to Boebert’s credibility. It’s not unheard of for people to be elected to Congress without a college degree–but when you lump this lack of educational achievement in with Boebert’s wacky political curiosities, shallow policy prescriptions, marginal legal history, and refusal to engage in unscripted debate, it adds up to a plainly unqualified candidate for Congress in any objective sense.

Most people, including most liberals, want to see leaders from all walks of life.