With GOP presidential candidate Ted Cruz solidly in control of Colorado’s slate of delegates to the Republican National Convention in July, it’s worth taking a look at exactly who constitutes Cruz’s “Colorado Leadership Team.” At least as of today, Team Cruz Colorado is a list noteworthy for its omissions as much as its inclusions: 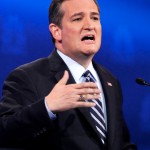 As you can see, Cruz’s “Leadership Team” in Colorado consists of the far-right wing of the Colorado legislature including most of the “Hateful Eight” Senators, as well as Secretary of State Wayne Williams and his immediate predecessor Scott “Honey Badger” Gessler. Missing from the list are such luminaries as Sen. Cory Gardner and Rep. Mike Coffman. But there is a name our readers know very well, Rep. Gordon “Dr. Chaps” Klingenschmitt–arguably the state’s most famously controversial Republican lawmaker.

MSNBC’s Steve Benen noted that Chaps’ presence on the list in particular today:

This is the guy Cruz welcomed onto his official Colorado Leadership Team.

I suppose the question I can’t quite shake is this: is there anyone too extreme for Ted Cruz? Just how far would a right-wing radical have to go before the Texas senator said, “Thanks for your support, but I’d prefer you not have any kind of association with my campaign”?

That’s really not a rhetorical question. I’m genuinely curious, because as things stand, it’s not clear if Team Cruz has any such limits.

Locally, the relationship between Republicans and Rep. Klingenschmitt has been a question of how they can keep him out of the headlines–which has included publicly condemning Klingenschmitt’s worst excesses when necessary, such as claiming Rep. Jared Polis wants to behead people like ISIS, or that the attack on a pregnant women in Longmont last year was “the curse of God upon America.”

But when it comes to Ted Cruz, it appears Klingenschmitt’s fringe follies are a feature, not a bug.