Get More Smarter on Tuesday (September 15)

By this time one month from now, you may have a 2020 ballot on your kitchen table. Let’s Get More Smarter. If you think we missed something important, please include the link in the comments below (here’s a good example). If you are more of an audio learner, check out The Get More Smarter Podcast. And don’t forget to find us on Facebook and Twitter.

► Vulgarity. That’s the difference between President Trump and Sen. Cory Gardner. Both Republicans are shameless opportunists who will seek to exploit any issue for their own political gain; Gardner just doesn’t directly say as many awful things as Trump.

Why do we bring this up? Because Gardner is out with a new television ad that is beyond despicable. Gardner is sitting at a table with his mother, who is a cancer survivor, and talking about his legislation to protect pre-existing medical conditions — legislation that doesn’t do anything and is anathema to everything Gardner has always espoused about government health care. But Gardner is trailing Democrat John Hickenlooper in the 2020 Senate race, so he’s flipping his own script.

As NBC News reported over the weekend:

Sen. Cory Gardner ran his first Senate campaign railing against the newly enacted Affordable Care Act, but six years later, the once-maligned law is getting little mention in his bid for re-election.

After years of campaigning against Obamacare, Republicans trying to retain control of the Senate appear to be conceding that attacking the ACA is no longer politically advantageous, a shift compounded by the millions of people who now depend on the law for their coverage, including protections for pre-existing conditions.

“Now with Obamacare being entrenched into people’s daily lives, they just don’t want their health care messed with, and so it becomes hard for Republicans to articulate on that point,” said Doug Heye, who worked on repeal efforts in 2014 as deputy chief of staff to then-House Majority Leader Eric Cantor, R-Va.

► A group of Colorado Republicans are AGAIN trying to recall Gov. Jared Polis, and their timing couldn’t be worse for the rest of the GOP. Instead of spending the next two months trying to get Republicans elected, these recall folks are instead going to be chasing a Nov. 13 petition signature deadline that they cannot possibly meet.

► Chris Cillizza of CNN has more on the continuing fallout regarding President Trump’s comments to Bob Woodward that he intentionally played down the coronavirus pandemic — including Trump’s insistence in March/April that everything “re-opens” before Easter:

This timeline is brutal for Trump. It makes clear that he knew, even as he was urging the country to reopen and for churches to be packed on Easter Sunday, that the virus was incredibly easy to pass from person to person.

For Trump to say that his entire strategy was to avoid panicking the public by “downplaying” the virus is bad enough.

But to actively encourage the reopening of the country when he knew that the virus was extremely contagious is, in a word, irresponsible. And in two words, dangerously irresponsible.

► Haze from multiple wildfires in the Western United States is now visible in New York City.

► The U.S. Postal Service is sending out confusing mailers about voting, and Colorado Secretary of State Jena Griswold is not having it.

► House Speaker Nancy Pelosi says she will keep the House in session until a new coronavirus relief stimulus package is approved by the Senate. After breaking for the August recess, Senate Republicans returned to Capitol Hill last week with a half-assed “skinny stimulus” proposal that went absolutely nowhere.

► As Dana Milbank reminds us in The Washington Post, the United States is really pretty good at running elections:

Trump has succeeded in sowing confusion about the ability of the United States to hold a free and fair election. His allies in Congress have abetted the sabotage by refusing to give states the funds they need to hold an election during a pandemic while defending against foreign adversaries’ interference. But despite the attempts to incapacitate elections, the United States is on course to give Americans more ways to cast ballots than ever — and more certainty than ever that their ballots will be accurately counted.

“While it’s critical we be clear-eyed about the problems and keep up the pressure to do better, there’s been too much alarmism,” Wendy Weiser, director of the Democracy Program at the New York University Law School’s Brennan Center for Justice. “People have the impression that the election is not going to work and they’re going to have problems, which is absolutely not the case for the vast majority of Americans.”

Here in Colorado, automatic ballot tracking will be available for all voters.

► The largest Super PAC devoted to gaining a Democratic majority in the U.S. Senate is closing in for the kill in Iowa in an effort to oust Republican Sen. Joni Ernst.

► As CNN reports, oil and gas industry boosters are running out of reasons to blame falling output and prices on government regulations:

Demand for oil may have peaked last year, according to BP, which says the global market for crude might never recover from the coronavirus pandemic.

In a new report published on Monday, the company lays out three scenarios for energy demand, all of which forecast a decline in demand for oil over the next 30 years. The scale and pace of the decline will be driven by the increasing efficiency and electrification of road transportation, BP (BP) said.

► Colorado is joining a lawsuit opposing a plan from the EPA to roll back methane regulations.

► As POLITICO reports, a new study from Harvard University’s Carr Center for Human Rights and Institute of Politics signals that things aren’t as bad in America as you might think:

As the U.S. heads into the final, 50-day sprint of a 2020 campaign in which political polarization has hit a fever pitch, new polling out on Tuesday reveals numerous points of bipartisan consensus among the American public on the rights and values key to the country’s national identity.

Moreover, the survey…found that more than 7 in 10 Americans believe they have more in common with one another than many people think.

► The Trump administration continually rejects the notion that The Big Orange Guy is too cozy with Russia. It doesn’t help their case when they make ads with Russian fighter jets. From The Washington Post:

“Support our troops,” said a digital advertisement from a joint fundraising arm of President Trump’s campaign and the Republican National Committee. That message, released on Sept. 11, was under a stock photo of a Russian-made MIG-29 fighter. Moscow has exported this model of jet, which was designed to counter the capabilities of U.S.-made F-15 and F-16 jets, to other American adversaries, including North Korea, Iran and Syria. A soldier in the image is carrying a Soviet-developed AK-47 assault rifle.

The Trump team’s MIG miscue, which was first reported by Politico and has since been taken down, is ironic considering the lengths to which the president and his aides have gone to reject any ties to Russia. The president has mused in his stump speech lately that he’s “probably entitled” to serve a third term because he lost so much time over the past three-and-a-half years defending himself against what he angrily denounces as “the Russia hoax,” a reference to the various investigations into him and his 2016 campaign.

As The Post notes, there are a handful of new books coming out that discuss how Russia is again looking to swing the Presidential election in Trump’s favor.

President Donald Trump revealed Tuesday that he wanted to assassinate Syrian President Bashar Assad earlier in his presidency, reversing his previous denial that the issue ever came up.

► Democrat John Hickenlooper is out with the first spanish-language television ad of the 2020 U.S. Senate race.

► As The Colorado Times Recorder reports, Republican Lauren “Q*Bert” Boebert decided to run for Congress in CO-3 because she didn’t understand how Congress works. You can’t make this stuff up.

► The CROWN Act is now the law in Colorado.

► Donald Trump once extolled the virtues of voting by mail.

► The Onion, spot-on as usual: 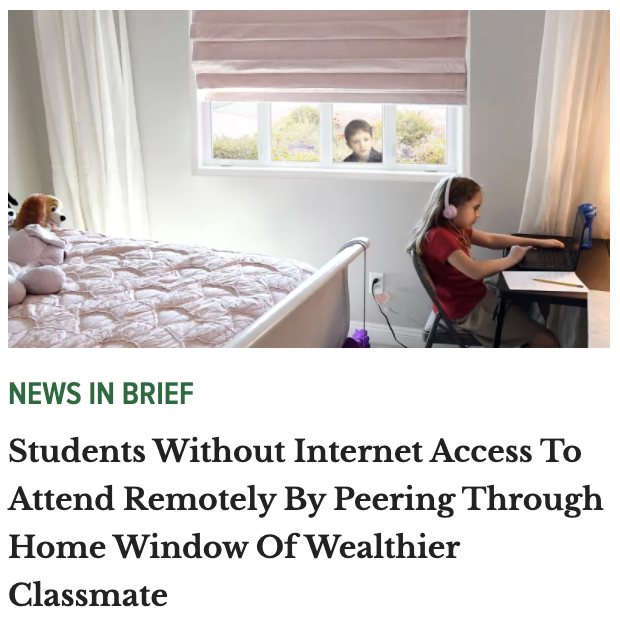 ► A new study from the CDC shows that you may be doubling your risk of contracting COVID-19 if you go out to a bar or restaurant.