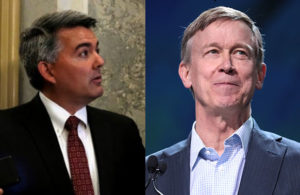 After a couple of polls inspired speculation that in Colorado, the race for President and our state’s U.S. Senate seat was “narrowing,” a new survey out today from Global Strategy Group for liberal group ProgressNow Colorado once again shows the Democratic candidates in both these races with the double-digit leads we’ve been accustomed to for months now:

The findings were released by the liberal advocacy group ProgressNow Colorado, which contracted with Democratic firm Global Strategy Group to conduct the survey. The pollsters surveyed 800 likely Colorado voters between Aug. 28 and Sept. 1, with a breakdown of party affiliations — 43% unaffiliated voters, 27% Republicans and 30% Democrats — that roughly mirrors the latest statewide breakdown reported by the Secretary of State’s Office. The poll has a 3.5% margin of error.

The poll finds Joe Biden leading Trump by 11 points in the presidential race. Kanye West will be on the state’s ballot in that race, too, and he received 1% support.

The poll finds that in the U.S. Senate race, Republican incumbent Gardner is down 10 points to Democratic challenger Hickenlooper, the former governor. Other recent polls have shown Gardner within single digits of Hickenlooper, including one released last week that put Gardner just five points behind. Many view Gardner as the most vulnerable Republican incumbent in the Senate, and the outcome of this race could be a deciding factor in whether Democrats can gain control of the chamber.

Read the details here. It’s a poll loaded with good news for Democrats and fans of recent Democratic policy accomplishments like the Senate Bill 217 police accountability law, which is favored by 69% of respondents, and a solid 58% approval of Gov. Jared Polis’ handling of the COVID-19 pandemic with 36% disapproving. President Donald Trump’s approval on handling the pandemic is stuck at 40% with 58% of Coloradans disapproving–and in tough news for CD-3 GOP nominee Lauren Boebert, only 8% of Coloradans have a positive view of the “QAnon” conspiracy theory.

Individual polls aren’t gospel, for anyone seeking a clear picture of any race or question polling is about informing averages. But these numbers feel pretty close to reality to us, and they’ll provide some comfort to Democrats riding out the September of their discontent.