QAnon Troubles Go From Bad to Worse for Boebert

We’ve been tracking in this space the troubles for Republican Congressional candidate Lauren “Q*Bert” Boebert over her previous comments of support for the controversial ‘QAnon’ movement. For obvious reasons, Boebert can’t seem to shake questions about her love for QAnon, and her campaign hasn’t figured out a good way out of this conundrum: Does she backtrack on her QAnon support and risk the wrath of that group of supporters, or stick with her previous comments and risk alienating every other rational voter in CO-3?

If you’re not familiar with QAnon, here’s a great description (with a fantastic British spelling) from the BBC:

At its heart, QAnon is a wide-ranging, unfounded conspiracy theory that says that Donald Trump is waging a secret war against elite Satan-worshipping paedophiles in government, business and the media.

Here’s what Boebert said about QAnon back in May:

“Honestly, everything that I’ve heard on ‘Q’ — I hope that this is real, because it only means that America is getting stronger and better, and people are returning to conservative values. And that’s what I am for. And, so, everything that I have heard of this movement is only motivating and encouraging and bringing people together, stronger, and if this is real, then it could be really great for our country.” 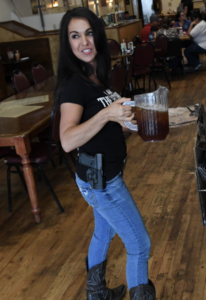 Boebert is going to need a bigger pitcher to put out this fire.

Now that you’re caught up, let’s talk about how this problem just got a LOT worse for “Q*Bert.” As NBC News reports:

Twitter announced Tuesday that it has begun taking sweeping actions to limit the reach of QAnon content, banning many of the conspiracy theory’s followers because of problems with harassment and misinformation. [Pols emphasis]

Twitter will stop recommending accounts and content related to QAnon, including material in email and follow recommendations, and it will take steps to limit circulation of content in features like trends and search. The action will affect about 150,000 accounts, said a spokesperson, who asked to remain unnamed because of concerns about the targeted harassment of social media employees…

…The sweeping enforcement action will ban QAnon-related terms from appearing in trending topics and the platform’s search feature, ban known QAnon-related URLs and prohibit “swarming” of people who are baselessly targeted by coordinated harassment campaigns pushed by QAnon followers.

The spokesperson said that while the targeted enforcement fell under Twitter’s existing platform manipulation rules, its classification of QAnon material and behavior as coordinated harmful activity was a new designation. The spokesperson said Twitter was acting now because of rising harm associated with the conspiracy theory. [Pols emphasis]

In a matter of hours, Boebert went from being a defender of a wacky conspiracy theory to a defender of a conspiracy theory that a social media giant has now declared to be a “coordinated harmful activity.” Questions for Boebert from reporters will now escalate, along the lines of, “Why do you support a movement that has literally been deemed dangerous by Twitter?” Boebert can try responding with her typical I just think it’s an interesting idea nonsense, but that answer will only make her QAnon problem worse.

This is what you might call a political disaster, and if you’re Democrat Diane Mitsch Bush, you’re more than happy to just get out of the way.