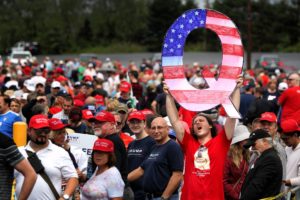 As the Grand Junction Sentinel’s Dennis Webb reports, the reality of June 30th’s biggest surprise in Colorado, the defeat of five-term incumbent Rep. Scott Tipton by upstart candidate Lauren Boebert, is sinking in with Republicans in CD-3–and although plenty of Republicans are gamely expressing excitement about Boebert, beneath the obligatory smiles there’s growing realization that this seat is in serious jeopardy:

Republican Brett Jolley believes voters in the primary just handed the seat to the Democrats and Mitsch Bush, unless somehow Trump has a landslide victory that carries over to Boebert’s race.

“I’m not thrilled about it,” he said of the primary outcome. “I’m afraid we just gave up our congressional seat.” [Pols emphasis]

Although there appears to be a long list of problematic moments in Boebert’s background waiting to be disclosed, the principal source of unease for Republicans immediately after Boebert’s victory in the Republican primary is an interview in which Boebert expressed enthusiasm for a fringe-right and thoroughly discredited conspiracy theory known as QAnon. Colorado Public Radio reported on Boebert’s “Q-curiousness” a week before the primary, and since then Boebert has been trying desperately to live it down:

Honestly, everything that I’ve heard on ‘Q’ — I hope that this is real, because it only means that America is getting stronger and better, and people are returning to conservative values. And that’s what I am for. And, so, everything that I have heard of this movement is only motivating and encouraging and bringing people together, stronger, and if this is real, then it could be really great for our country.

But in this latest Sentinel story about Republican unease with Boebert, we see that her dodge on the QAnon question actually says the quiet part out loud with astonishing frankness:

“I don’t follow QAnon,” she said last week. “The thing that I was referring to — anything that’s going to get conservatives to get involved with politics is definitely interesting and worth looking at.” [Pols emphasis]

Boebert just spilled the beans–not just about her own willingness to embrace QAnon, “Pizzagate,” “death panels,” Barack Obama’s birthplace, or any other fringe fiction fashionable on the far right, but why Republicans with much more political savvy than Boebert pander to these movements too. QAnon turns out conservative votes. Instead of condemning the QAnon fringe, she’s admitting that this fringe is part of her base.

By confirming the very thing she set out to deny, Boebert is validating the worries of detractors who say she’s simply out of her depth in the high-profile congressional race she created by winning–and that Scott Tipton’s weakness, which we’ve highlighted for years in this space, does not make Lauren Boebert a viable candidate.