Get More Smarter on Friday (June 26)

Don’t look now, but we’re rounding the bend of June and rolling into July already. Let’s Get More Smarter. If you think we missed something important, please include the link in the comments below (here’s a good example). If you are more of an audio/visual learner, check out The Get More Smarter Show or The Get More Smarter Podcast. And don’t forget to find us on Facebook and Twitter.

***If you still have a Primary Election ballot at home, don’t put it in the mail! Go to GoVoteColorado.com to find a ballot drop off location near you.***

► It might still be the first wave. Maybe it’s a second wave. The number doesn’t really matter, because the important part is that the COVID-19 is still growing in the United States with 40,000 new cases being reported. Texas is seeing a huge spike in coronavirus cases, as is Arizona — two Republican-led states in the southwest that were too anxious to reopen without making sure it was safe to do so.

The Washington Post explains how Arizona lost control of the pandemic:

Maricopa County, which includes Phoenix, is recording as many as 2,000 cases a day, “eclipsing the New York City boroughs even on their worst days,” warned a Wednesday brief by disease trackers at Children’s Hospital of Philadelphia, which observed, “Arizona has lost control of the epidemic.”

But physicians, public health experts, advocates and local officials say the crisis was predictable in Arizona, where local ordinances requiring masks were forbidden until Gov. Doug Ducey (R) reversed course last week. State leaders did not take the necessary precautions or model safe behavior, these observers maintain, even in the face of compelling evidence and repeated pleas from authoritative voices.

“We have failed on so many levels,” said Dana Marie Kennedy, the Arizona director of AARP, who said her organization has yet to receive a response to four letters outlining concerns to the governor. She is working on a fifth.

Neither the governor’s office nor the state health department responded to requests for comment.

Florida — another Republican-led state — is slowing down its reopening process because of a surge in cases; on Friday, Florida reported nearly 9,000 new cases (the state’s previous daily high was 5,500).

Colorado has also seen an uptick in coronavirus cases, but not nearly to the extend of neighboring states. Within Colorado, El Paso County is one of the worst-hit areas; it’s not a coincidence that El Paso is a solid-red Republican county.

At the White House today, Vice President Mike Pence will provide a media briefing on the nation’s coronavirus response…the first such briefing IN TWO MONTHS.

President Trump, meanwhile, is apparently watching an entirely different movie than everyone else:

Coronavirus deaths are way down. Mortality rate is one of the lowest in the World. Our Economy is roaring back and will NOT be shut down. “Embers” or flare ups will be put out, as necessary!

What’s more, a whopping 49% of voters “strongly disapprove” of the job Trump is doing. That kind of intensity of disapproval is a record never before seen for this president or any past one. [Pols emphasis]

So much winning! The #1 most disliked President ever!

► Sticking with the subject of political polling, 9News released new data on Thursday showing that the race for the Democratic U.S. Senate nomination is pretty much over. According to data from SurveyUSA, former Gov. John Hickenlooper is a 2-to-1 favorite over former House Speaker Andrew Romanoff ahead of Tuesday’s Primary Election. 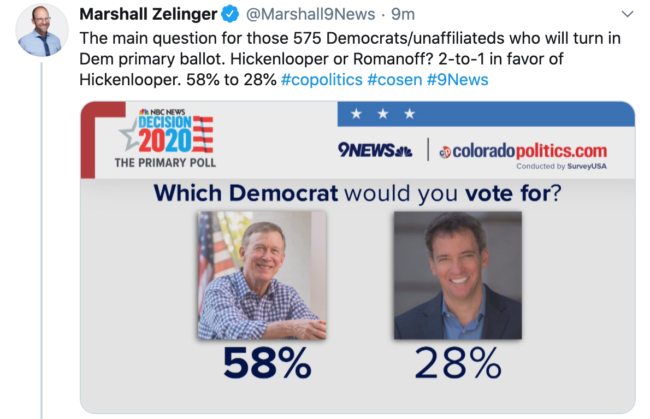 Hickenlooper is probably not going to beat Romanoff by 30 points, but as the saying goes, you can tell the “fat lady” to start warming up.

► Political suicide. On Thursday the Trump administration announced another boneheaded decision that one Republican consultant called “pretty dumb” earlier this week. As The Washington Post reports:

The Trump administration asked the Supreme Court late on Thursday to overturn the Affordable Care Act, telling the court that “the entire ACA must fall.” The administration’s argument comes as hundreds of thousands of Americans have turned to the government program for health care as they’ve lost jobs during the coronavirus pandemic.

House Speaker Nancy Pelosi (D-Calif.) responded to the brief by saying there is “no moral excuse for the Trump Administration’s disastrous efforts to take away Americans’ health care.” Dismantling the ACA would leave more than 23 million people without healthcare plans, according to a recent analysis by the liberal-leaning think tank Center for American Progress.

“President Trump and the Republicans’ campaign to rip away the protections and benefits of the Affordable Care Act in the middle of the coronavirus crisis is an act of unfathomable cruelty,” Pelosi, who on Wednesday filed a bill to expand the ACA, said in a statement.

Again, the Trump administration is making a big show of trying to take away health insurance for millions of people in the midst of an historic global pandemic that is pummeling the United States. Is Trump trying to lose in 2020?

This is also bad news for Sen. Cory Gardner (R-Yuma), who has repeatedly voiced support for destroying the ACA through the courts.

► Governor Jared Polis has directed Attorney General Phil Weiser to re-examine the death of Elijah McClain, who may have been killed by Aurora police officers last August. From The Denver Post:

Prosecutors opted not to charge the three Aurora officers involved in the incident, which culminated with McClain being placed in a chokehold, then given a sedative by medical personnel, after he refused to stop for police responding to a report of a suspicious person walking down the street.

The governor’s office said that if the facts support prosecution, Weiser would also criminally charge any individuals whose actions caused McClain’s death.

“I was moved by speaking with Elijah’s mother and her description of her son as a responsible and curious child who became a vegetarian to be healthier, and who could inspire the darkest soul,” Polis said in a statement. “His friends describe him as a gentle peacemaker who worked as a massage therapist and enjoyed playing the violin. Elijah McClain should be alive today, and we owe it to his family to take this step and elevate the pursuit of justice in his name to a statewide concern.”

► Republican State Senate candidate Suzanne Staiert demonstrated this week how NOT to respond to a news story asking fair questions about your ethical lapses.

► As CBS4 Denver reports, a police accountability bill sponsored by Rep. Joe Neguse (D-Boulderish) has been passed by the House of Representatives.

► Colorado ski resorts are worried about President Trump’s recent order to extend a ban on visas for immigrant workers.

► “Second Lady” Karen Pence visited Colorado on Thursday. She even wore a mask!

► The ACLU is suing Denver over the police department’s use of force against non-violent protestors.

► Say adios to this Christopher Columbus statue in Denver. We’re curious, though: Did protestors roll it away, or what?

► A section of I-70 in Denver will be closed this weekend as part of the “Central 70” project.

► Here’s a list of more than 150 suggested new names for the Stapleton neighborhood in Denver. We’re disappointed that “Neighborhood McNeighborhood Face” didn’t make the cut.

► The City of Aurora has accused the Arapahoe County Assessor’s office of, uh, mis-assessing properties. A local judge ruled in favor of the Assessor.

► As Vox.com reports, faculty and students at universities and colleges nationwide are not enthusiastic about opening up in-person classes in the fall.

► If President Trump has a re-election strategy, POLITICO would be interested in learning about it:

Trump has advanced policies, gone off script in interviews or lashed out on Twitter in ways that contradict his own campaign’s attempts to slice into the Democrats’ advantages with African Americans, Asian Americans and Hispanics.

Some Trump allies blame a lack of coordination between the White House and campaign. Others say Trump is simply responding to the unexpected shifts in the world after the pandemic seized the American economy. Still, there are those who say Trump’s policies have simply never been in line with the priorities of many communities of color — and that any attempt to bolster his standing with them was always a quixotic endeavor.

“The campaign may have strategies, but Trump doesn’t have much of a strategy ever except to cater to his base,” said Rob Stutzman, a Republican political strategist based in Sacramento, Calif. “And there’s no discipline to his strategy. I think he’s incapable of adhering to a strategy. That’s why he inflicts so much damage on himself.”

CNN is also perplexed about what Trump will be saying as the 2020 election heats up.

► Florida finally put the brakes on alcohol consumption in bars as COVID-19 ravages the state.

► A reminder: Colorado Pols is NOT sending you text messages or email messages about the Primary Election.

► Check out our post-legislative interview with Assistant House Majority Leader Chris Kennedy in the latest episode of The Get More Smarter Podcast: