FRIDAY UPDATE #2: The People’s Republic of Florida joins Texas in shutting down the bars.

Texas’ governor ordered further restrictions on businesses Friday, a day after he “paused” a phased economic reopening following a surge in coronavirus cases.

The state reported a record of almost 6,000 new cases on Thursday as infection numbers are rising in more than 30 states. The US has just set a daily record for new coronavirus cases, and federal health officials warned that the number of people who’ve been infected is vastly undercounted.

“At this time, it is clear that the rise in cases is largely driven by certain types of activities, including Texans congregating in bars,” Gov. Greg Abbott said Friday in a news release.

Someone let Pat Neville know the “tyranny” is bipartisan now, at least in Texas. 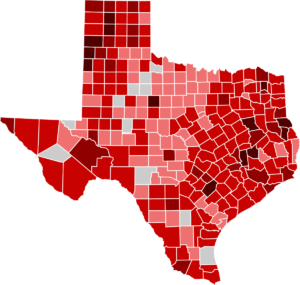 As The Hill reports, resurgence of the COVID-19 pandemic in the state of Texas is forcing that state’s fiercely conservative Republican Gov. Greg Abbott to “pause the reopening” of the state’s economy:

“As we experience an increase in both positive COVID-19 cases and hospitalizations, we are focused on strategies that slow the spread of this virus while also allowing Texans to continue earning a paycheck to support their families,” Abbott said in a statement. “The last thing we want to do as a state is go backwards and close down businesses. This temporary pause will help our state corral the spread until we can safely enter the next phase of opening our state for business.”

Experts have watched with growing alarm as the number of confirmed cases in Texas rise past 125,000. The state is dealing with an estimated 50,000 active cases, one of the highest numbers in the nation.

Texas has added more than 5,000 new cases on each of the last two days, and the number of overall cases has doubled since the end of May.

The recent growth in COVID-19 cases in Texas is of course very concerning given the close economic and cultural contact between that state and our own state of Colorado, separated as they are by just a few miles of Oklahoma where the virus is also spreading rapidly. We have no interest in disparaging Texans, or any other populations whose political culture may or may not contribute to a greater local susceptibility to spreading the disease.

But we are obliged to note that this is not Gov. Jared Polis pausing reopening of our state’s economy, for whom partisanship has made it all too convenient for Colorado Republicans to cast necessary measures taken to control the spread of the pandemic as liberal tyranny. And it’s very likely true that greater respect in Colorado for basic best practices like social distancing and mask wearing have kept us off the list of states with dramatically spiking caseloads–so far.

The one thing we can say, while wishing our neighbors in Texas well under these difficult circumstances, is that at least in Texas they have proof it’s not a Democratic “Plandemic.”