No, We Are Not Sending You Text Messages

This here website has been around for 15 years, and during that time, we’ve been accused of harboring bias in favor of pretty much every politician and political belief imaginable.

And that’s okay — it comes with the territory. We’ve never blocked or disallowed any comments centered around any specific gripe, and we never will. If you want to accuse us of being secretly funded by George Soros, knock yourself out. If you want to voice your belief that Colorado Pols is overseen by Republican megadonor Sheldon Adelson, have at it.

But whatever you read at Colorado Pols is because YOU came HERE to read it. We’ve received a few emails recently complaining about some anonymous text messages that either look like they came from ColoradoPols.com or contain a link to a Pols post. We haven’t sent anyone anything. If we were doing this, it wouldn’t make a lot of sense to be advocating for both Democratic U.S. Senate candidates, John Hickenlooper and Andrew Romanoff. Take a look at two examples we’ve been forwarded: 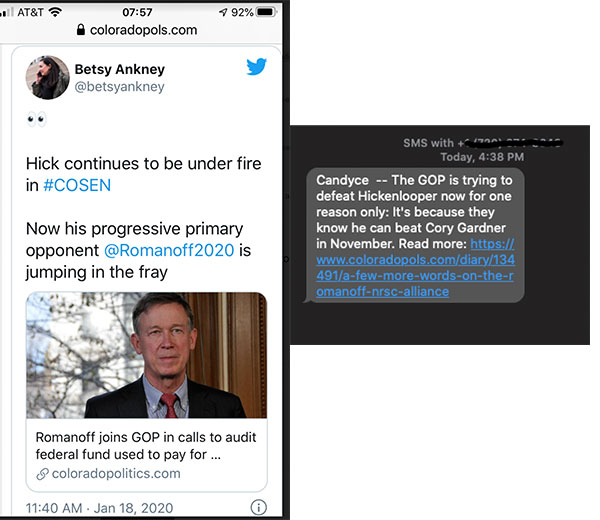 As you can see above, the first example is an anti-Hickenlooper message that looks like it came from “coloradopols.com” but links to a story from ColoradoPolitics.com; the image is of a real Tweet sent in January by Betsy Ankney from the National Republican Senatorial Committee (NRSC). The second example appears to be a pro-Hickenlooper message that links to this post of ours from January that also included a screenshot of Ankney’s tweet — though for an entirely different reason.

We’re not the only ones being spoofed in political communications — the same thing is happening to The Colorado Sun, apparently.

It’s pretty easy to spoof a text message, from what we understand, so there’s not much we — or anyone — can do about this. All we can tell you is that it’s not coming from us.