As announced by 9NEWS’ Marshall Zelinger a short while ago this evening, a new poll of the Colorado Democratic U.S. Senate primary slams home just days before voting ends the overwhelming advantage enjoyed by former Gov John Hickenlooper in this race: 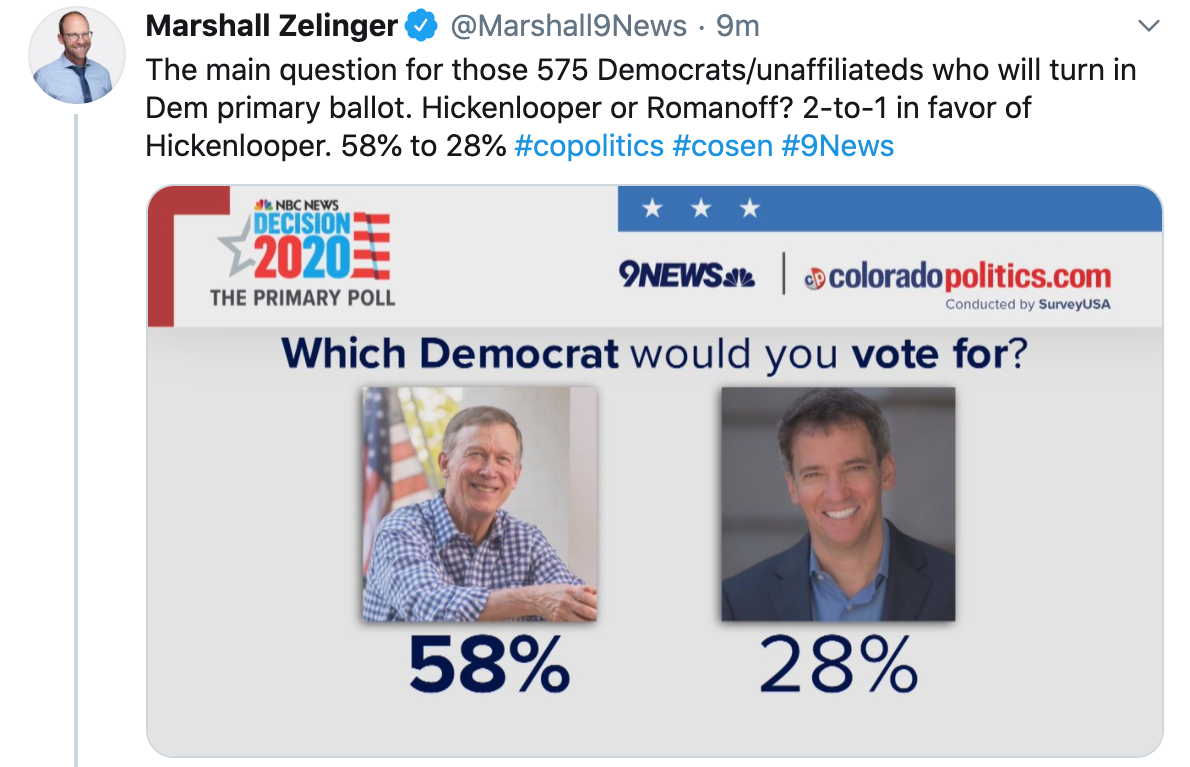 A thirty-point advantage for Hickenlooper in this poll underscores a simple fact: all of the recent hullaballoo over Hickenlooper’s stumbles is still not enough to overcome eight years of beneficial experience as the popular though quirky and unpolished Democratic governor of Colorado, and years before that as Denver’s equally personable brewer-mayor. Every attempt to take Hickenlooper down politically immediately runs into an enduring positive impression he left with the voters of Colorado after leaving office.

The numbers in this poll explain very clearly why Democrats focused in defeating incumbent GOP Sen. Cory Gardner have stuck with Hickenlooper around the rough edges: 67% say that Hickenlooper has the better chance of beating Gardner than Andrew Romanoff, and 62% say Hickenlooper is “an ethical guy who made some mistakes”–a clear indicator that the recently concluded ethics proceeding that resulted in some minor findings of fault for travel expenses did not do lasting damage to Hick’s reputation.

From the moment Hickenlooper entered the U.S. Senate race last summer, the result anticipated in this poll was the most likely outcome. Hickenlooper is the only contender in the primary who ever demonstrated the organizing and fundraising capacity for a contested U.S. Senate race. In an election with enormous importance for Democrats and a growing chance to actually retake the Senate, any advantage in one race that allows Democrats to allocate resources into another is crucial to the larger strategy.

This poll tells us that Colorado Democratic primary voters get it.