Hickenlooper Walked Through an Open Door 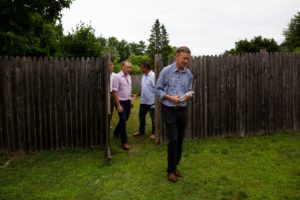 The decision by former Gov. John Hickenlooper to enter the race for U.S. Senate has stirred up some recognizable complaints about outside forces conspiring to foist a preferred candidate upon the masses in Colorado. Many of these are familiar arguments from familiar faces, but are they accurate?

As Chase Woodruff wrote recently for Westword, any number of Democratic candidates could potentially defeat incumbent Republican Sen. Cory Gardner in 2020. We’re not convinced this is true, but regardless, it is an incomplete argument because none of these candidates are equally likely to succeed. You may be able to make a case that former State Senator Mike Johnston and former House Speaker Andrew Romanoff could each defeat Gardner in 2020, but you’d be a fool to imply that Trish Zornio has similarly favorable odds.

If you can allow that Johnston or Romanoff are better candidates than Zornio, then you must also be prepared to acknowledge that there are better potential candidates than any of the current bunch of hopefuls. That’s what is happening with Hickenlooper’s candidacy. Nothing more.

The @dscc makes a choice for #COSen; and it makes sense. Why? Because @hickenlooper is the most efficient use of money&effort that they can then focus more on other contests. A cleared field is a cheaper, less politically damage inflicting option for the party. #copolitics (1/2) https://t.co/cxbtEUk0ST

The reality is this: If there was even one candidate already in the race that had demonstrated strong fundraising ability and unmistakable support among a broad group of Democratic voters, then Hickenlooper wouldn’t be running. Period. The Democratic Senate Campaign Committee (DSCC), for example, is charged with trying to win control of the Senate Majority in 2020. It doesn’t serve their purpose to stoke a competitive Primary race if they already felt comfortable with the current field of candidates. The DSCC wants to win, and they think Hick has the best chance to do that in Colorado. It’s not more complicated than this.

Johnston, Romanoff, and all of the other Democratic candidates have had months and months to show that they were indisputably the best of the bunch. None of them could do it. That’s not to say that some of these candidates would not have been able to eventually rise to the top of the pack, but how long are you supposed to wait for them? The first person to file campaign paperwork isn’t entitled to a 12-month head start.

We don’t blame supporters of any candidate for being upset when a recognizable name enters a race they hoped to win — but that’s politics. If you leave a door open, eventually someone else is going to walk inside.