At Least He’s Not Your City Councilman 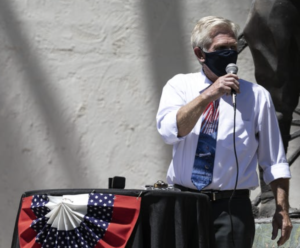 In another edition of our long-running feature, “At Least They’re Not Your Legislator,” we take you to Scottsdale, Arizona, to meet one of the most tone-deaf dipshit politicians you’ll ever come across.

Take the mask off!” they yelled. Phillips stood looking at them for a moment.

Then, in a monotone voice, he said into the microphone, “I can’t breathe.”

He said it again, louder: “I can’t breathe” — echoing the dying words of George Floyd that have become a rallying cry in nationwide protests against police violence. [Pols emphasis]

Then Phillips ripped off the mask, rolled his eyes and feigned relief as the crowd cheered for him. “Insanity!” he said of the mask mandate.

Of course, this goes beyond politics. Just don’t be an asshole, okay?