Get More Smarter on Thursday (February 20) 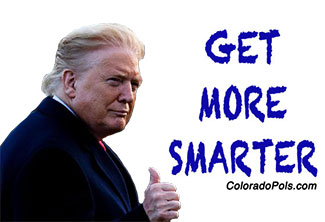 Happy National Love Your Pet Day…though that kinda seems like something that should just be every day. It’s time to Get More Smarter. If you think we missed something important, please include the link in the comments below (here’s a good example). If you are more of an audio/visual learner, check out The Get More Smarter Show or The Get More Smarter Podcast. And don’t forget to find us on Facebook and Twitter.

► President Trump is in Colorado Springs today for a rally with Sen. Cory Gardner (R-Yuma) as part of the post-impeachment payback tour. This event has been publicly known for about a week, but there was an interesting late addition to the schedule on Wednesday: Vice President Mike Pence. It’s pretty unusual for both the President and Vice President to appear in the same place at the same time for a political rally.

Colorado Public Radio has a pre-rally guide for those who will be listening to the speechifying. Ernest Luning of the publication formerly known as the Colorado Statesman looks back at how Colorado Republicans became Trumpians.

Oh, and for you local taxpayers: The bill is in the mail.

► Democratic Presidential candidates debated in Las Vegas on Wednesday, where former New York City Mayor Michael Bloomberg played the role of a piñata. Massachusetts Sen. Elizabeth Warren appears to be the big winner from Nevada scuffle with a strong, fiery performance that was evident from the first moments of the debate. Warren will visit Denver on Sunday for a campaign rally at the Fillmore Theater.

For more on Wednesday’s debate, here’s “Winners and Losers” from CNN, The Washington Post, the New York Times, Politico, and NBC News.

► 9News managed to catch up with “Colorado’s most elusive politician,” finding Sen. Cory Gardner bobbing his head like some kind of maniacal, over-caffeinated squirrel:

Gardner danced around when 9News reporter Marshall Zelinger asked him if there was anything Trump could do to lose his support, then mumbled something about how it is inappropriate for foreign governments to interfere in American elections. Gardner really tried to expand the meaning of the phrase “town hall” at the end of this interview; he has not held one of those since November 2017. Senator Michael Bennet (D-Denver) is holding three town hall meetings this week.

Maybe Gardner is a bit blue because Larry Sabato’s Crystal Ball has moved Colorado’s 2020 U.S. Senate race from “Toss Up” to “Leans Democratic.”

► It’s been a good week for former Gov. John Hickenlooper, who is seeking the Democratic nomination for U.S. Senate in 2020. Hickenlooper’s campaign needed just a couple of weeks to collect the required number of signatures to grant him ballot access in June. This week he also picked up high-profile endorsements from Senate President Leroy Garcia and Pipefitters Local 208. 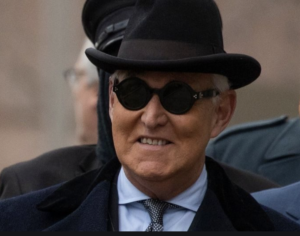 ► Longtime Trump crony and creepy cartoon villain Roger Stone was sentenced to 40 months in prison today, though the odds are probably pretty good that President Trump will just pardon him anyway. As The Washington Post reports:

The penalty from U.S. District Judge Amy Berman Jackson comes after weeks of infighting over the politically charged case that threw the Justice Department into crisis, and it is likely not to be the final word. Even before the sentencing hearing began, Trump seemed to suggest on Twitter he might pardon Stone. With the proceedings ongoing, Trump questioned if his ally was being treated fairly.

In a lengthy speech before imposing the penalty, Jackson seemed to take aim at Trump — saying Stone “was not prosecuted for standing up for the president; he was prosecuted for covering up for the president.” She also appeared to call out Attorney General William P. Barr, whose intervention to reduce career prosecutors’ sentencing recommendation she called “unprecedented.” But she said the politics surrounding the case had not influenced her final decision.

“The truth still exists, the truth still matters,” Jackson said. “Roger Stone’s insistence that it doesn’t, his belligerence, his pride in his own lies are a threat to our most fundamental institutions, to the foundations of our democracies. If it goes unpunished it will not be a victory for one political party; everyone loses.”

► Results are out from the 10th annual “Conservation in the West” poll, which gauges voter interest in a number of environmental issues. As Bruce Finley explains for The Denver Post:

Eighty percent of voters in Colorado and seven other western states prioritize air, land, water and wildlife issues as key factors in electing leaders, including more than four in 10 who say the environment is very important or their primary factor compared with health care and the economy, a new public opinion poll has found.

And global warming increasingly preoccupies voters across the Rocky Mountain region, according to the results of the Colorado College State of the Rockies Project’s annual Conservation in the West poll.

Elsewhere, Wisconsin Sen. Amy Klobuchar is in Denver today and has been staffing up in Colorado.

► Fox 31 News says political campaigns are good for the economy!

► Congressman Jason Crow (D-Aurora) will hold a town hall meeting on Monday, his first since serving as one of seven House Impeachment Managers in this month’s Senate trial of President Trump.

► As Judith Kohler writes for The Denver Post, our air sucks:

Two environmental groups are suing the Environmental Protection Agency for what they say is a failure to ensure that required plans are in place to protect Colorado’s Front Range from pollution produced by oil and gas operations.

The Center for Biological Diversity and the Center for Environmental Health filed a complaint Wednesday in federal court in Northern California that adds the metro Denver area to a lawsuit saying the EPA has missed deadlines for approving state plans targeting oil and gas emissions. The Colorado plan covers a nine-county swath in the Denver-metro area and to the north along the Front Range that has violated federal air quality standards for years.

In December, the EPA downgraded the area from being a “moderate” violator of the standards to a “serious” violator, which will require stricter controls to reduce pollution.

► Colorado Public Radio reports on the steady progress of two pieces of legislation dealing with low vaccination rates in Colorado. Hundreds of people showed up to speak at a Senate committee hearing for one of the bills.

► The Colorado Springs Independent updates the progress of a hair discrimination bill at the State Capitol.

► The Trump loyalty purge claims another victim, one day after John Rood — a top Defense Department official — was asked to resign by President Trump.

► Right-wing Republicans in Oregon want to secede into Idaho because the rest of the state is no longer listening to their nonsense. As CNN’s Chris Cillizza explains:

Let’s be clear about something before we go any further: This isn’t going to happen. To change the boundaries of a state, such a move would need to be approved by both the state legislature and Congress (It’s in the Constitution).

It’s been more than 100 years since the US boundaries have changed or expanded. And it’d hard to see the Oregon legislature, controlled by Democrats, willingly handing over counties — and representation — to its conservative neighbor to the east.

But the “Greater Idaho” effort is far from alone. In West Virginia, there is an effort in the state legislature to add several northwestern Virginia counties to the Mountain State — a moved known colloquially as “Vexit” (Pretty good, right?).

The motivation is much the same as what’s behind “Greater Idaho”: Virginia has moved far to the left as the state’s population in the DC suburbs has continued to soar. Voters in parts of the state far removed from DC are significantly more conservative and are not having their views properly represented. Hence, Vexit.

Here in Colorado, right-wing Republicans often fantasize about secession and bat their eyes at Wyoming or Kansas. Secession even made the ballot here in 2013; voters dismissed the idea outright.

► Don’t miss this week’s episode of The Get More Smarter Podcast for a discussion about how a new voter analysis portends big trouble for Colorado Republicans.