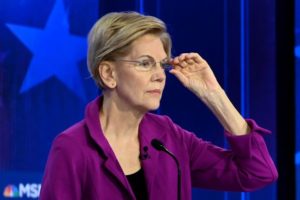 Although we are predominately concerned with Colorado politics in this space, our upcoming Super Tuesday date with destiny has all eyes in Colorado squarely focused on every development in the Democratic presidential primary–and last night, by all accounts, something dramatic happened at the Democratic presidential debate in Las Vegas that could have far-reaching effects on the race. Politico:

The Vegas debate stage had the feel of a late-night party suddenly crashed by an unwelcome visitor. [Sen. Elizabeth] Warren, who often says she “grew up fighting,” seized the role of bouncer from the earliest minutes, when the TV audience is often largest, by describing Bloomberg as “a billionaire who calls women ‘fat broads’ and ‘horse-faced lesbians.’” She later moved on to his record on civil rights (“You need a different apology here, Mr. Mayor”), accused him of “hiding his tax returns,” and performed an impromptu prosecution of Bloomberg’s use of non-disclosure agreements.

“Democrats take a huge risk if we just substitute one arrogant billionaire for another,” she said. [Pols emphasis]

When Warren wasn’t filleting Bloomberg, who stood directly to her right — mostly expressionless except for a dramatic eye roll during the NDA exchange — she turned to her left and delivered a rapid-fire series of attacks on Joe Biden, Pete Buttigieg, and Amy Klobuchar, often in the same 90 seconds of her allotted time to answer a question.

The Daily Beast’s Erin Gloria Ryan captured some of the emotion from the epic “beatdown” delivered by Sen. Elizabeth Warren last night, mostly to former New York Mayor Michael Bloomberg but ably knocking down everyone else on stage–not even fully sparing Sen. Bernie Sanders as she’s developed a reputation for. Warren took a rare shot at Sanders, calling out his campaign for “relentlessly [attacking] everyone who asks a question or tries to fill in details about how to actually make this work.”

The Vegas crowd went wild, as Vegas crowds are wont to do during a beatdown.

After that, Bloomberg spent the rest of the debate with about as much gravitas as a ventriloquist dummy without a lap to sit on. Elizabeth Warren, meanwhile, turned in her strongest debate performance yet, striking Bloomberg over and over again like a viper with a grudge. Bloomberg was annihilated. He was decimated. He was degloved. Everything that a Democratic voter might find distasteful about Bloomberg was laid bare for everybody to see.

Warren didn’t just turn her sights on Bloomberg. She diminutized Mayor Pete’s health-care plan by calling it “a PowerPoint.” She called out Amy Klobuchar for having only two paragraphs explaining hers. She called out the idea of being a moderate in the first place. “We can’t be so eager to be liked by Mitch McConnell that we forget how to fight,” she said in reference to the moderates Joe Biden and Klobuchar, to thunderous, Vegas-y applause. By the time it was all over, it was clear that she’d won this one like Secretariat won the 1973 Belmont Stakes. Like a tremendous machine.

Sen. Warren is headed to Denver on Sunday for a rally at the Fillmore Theater, and her field campaign is fully engaged chasing ballots which are already in the hands of Colorado voters. The effect this powerful debate performance could have on the result, inversely proportional to the damage it may do to Bloomberg, is limited only by the audience for presidential primary debates and post-debate coverage of the extent to which Warren shredded the entire rest of the stage. Warren needs this to be a turning point, and Bloomberg needs the Democratic electorate to develop mass amnesia.

With that, we’ll turn it over to our readers: did Warren end Bloomberg last night? If so, did she distinguish herself enough to pull support from the rest of the field in time to stop Sanders’ widening delegate lead? The growing recognition that there can be only one Sanders alternative, and the persistently undecided nature of primary voters right up until the last minute this year, creates space where anything seems possible.