A U.S. Senator Held a Town Hall Meeting; Guess Which One? 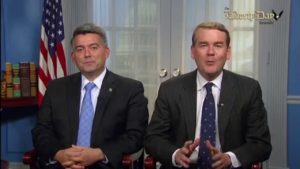 The answer to the question in the headline is not very difficult to ascertain, so we’ll just skip to this story from The Denver Post:

On Tuesday evening, U.S. Sen. Michael Bennet fielded concerns about the upcoming election during a town hall to a crowd of around 120 at the Peak Community and Wellness Center in Littleton.

“Everyone has to understand what’s at stake here,” Bennet said. “The rule of law is getting shattered.”…

…Bennet discussed the challenges Coloradans face trying to afford health care, housing and higher education. Jo Douglas, a 60-year-old from Littleton, asked Bennet about getting health insurance plans that are more accustomed to the needs of Coloradans.

“We have a broken health care market,” Bennet said. “Part of the problem we have, especially in rural areas, is there aren’t enough people in certain parts Colorado to have a real market to get people insured in a way that’s predictable and affordable.”

As a candidate for President, Bennet has spent most of the last year campaigning in other states; one week after ending his Presidential bid, he was back in Colorado talking to constituents.

Colorado’s other Senator, Republican Cory Gardner, last held a public town hall meeting on November 20, 2017. He has not been busy running for President.