CNN’s Manu Raju is the latest reporter in Washington to make a run at the nation’s most elusive U.S. Senator, Cory Gardner of Colorado–and in the few literal seconds they had together, Gardner actually revealed quite a bit about where he stands in the ongoing impeachment trial against President Donald Trump.

That is, with Trump:

Asked if he wants to hear from Bolton or Mulvaney, Gardner said: “We have a lot of impeachment witnesses.” And the elevator doors closed.

The key thing to note here that Gardner is committing only to consider the testimony from “witnesses that we’ve heard from in the House”–not any of the damning new evidence that emerged since the House passed the articles of impeachment, and not even the testimony being freely offered by potentially explosive witnesses like ex-National Security Adviser and alleged friend of Cory John Bolton. For anyone trying to do the math to get Democrats to a majority needed to introduce new witnesses and evidence now or later in the trial, this is a strong signal that Gardner will not be breaking ranks with the President.

And it’s not surprising anyone in the know: 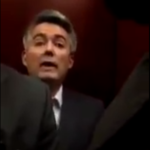 At the same time, Gardner’s continuing refusal to take a concrete position even as he votes with the President is politically self-destructive in its own right. Although this time Gardner had the mercy of a closing elevator door, he’s already become a nationwide metaphor for the total inability of Republican Senators to conduct effective oversight of their own President–or even answer the most basic questions about the case against him.

Yesterday, GOP Senators were told bluntly: “vote against the President and your head will be on a pike.” For Cory Gardner, on trial for his future as much as Trump himself, the doublespeak that served him so well winning statewide office has run head-first into the reality of who he truly serves–and it is hurting him now worse than saying nothing at all.

It’s just too easy to read between the lines.