Cory Gardner dodged when asked about having Bolton as a witness: “Is Nancy going to send the articles over? She doesn’t seem to care?” 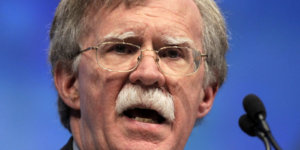 A big development to kick off the news week/year in the impeachment case against President Donald Trump, as the New York Times reports:

John R. Bolton, the former White House national security adviser, said on Monday that he was willing to testify at President Trump’s impeachment trial if he was subpoenaed…

The development is a dramatic turn in the impeachment proceeding, which has been stalled over Democrats’ insistence on hearing from critical witnesses Mr. Trump blocked from testifying in the House inquiry into his pressure campaign on Ukraine. Mr. Bolton is a potential bombshell of a witness, with crucial knowledge of the president’s actions and conversations regarding Ukraine that could fill out key blanks in the narrative of the impeachment case.

His willingness to tell the Senate what he knows ratchets up pressure on Senator Mitch McConnell, Republican of Kentucky, who has refused to commit to calling witnesses at the impeachment trial, to change his stance. It is unclear how the White House will respond to Mr. Bolton’s declaration, but his statement strongly suggested that he would testify regardless of whether Mr. Trump sought to prevent him. [Pols emphasis]

Accordingly, since my testimony is once again at issue, I have had to resolve the serious competing issues as best I could, based on careful consideration and study. I have concluded that, if the Senate issues a subpoena for my testimony, I am prepared to testify.

Readers will recall that last September’s sudden exit by Bolton from the Trump White House was followed just days later be donations from Bolton’s PAC to a clutch of key Republican Senators who allegedly possess “remarkable understanding and knowledge of the threats we face” globally, prominently including Sen. Cory Gardner of Colorado. Gardner has been dead silent on impeachment in recent weeks after joining Republicans in condemning the process wholesale, but Bolton being called to testify against Trump is one of a few scenarios in the upcoming impeachment trial that could make it much harder for Gardner to stay under the radar.

Bolton’s potential testimony in the Senate trial against Trump is now one of several points of contention between GOP Senate Majority Leader Mitch McConnell and ranking Senate Democrat Chuck Schumer the two leaders are haggling over in advance of the impeachment articles being formally delivered by the House. But either way, whenever Sen. Gardner gets cornered next an update on the Gardner/Bolton mutual admiration society is definitely in order.