It was two weeks ago that Republican Members of Congress stormed a Sensitive Compartmented Information Facility (SCIF) in the basement of the Capitol in order to highlight their protest that impeachment investigations were unjust because hearings were held behind closed doors (nevermind that Republican members of these particular House committees were always able to attend the hearings).

Two days later, Sen. Cory Gardner (R-Yuma) co-sponsored a resolution in the Senate criticizing the House for a lack of openness on impeachment matters. “I hope people will read the resolution and that everyone supports a fair and transparent process,” said Gardner. This was more than Gardner had said previously about President Trump’s actions; Gardner infamously bombed in front of a group of reporters when asked whether it was appropriate for the President of the United States to ask a foreign government to interfere in American elections.

Today, Gardner and his fellow Republicans learned once more that following Trump’s lead will only get you hopelessly lost: 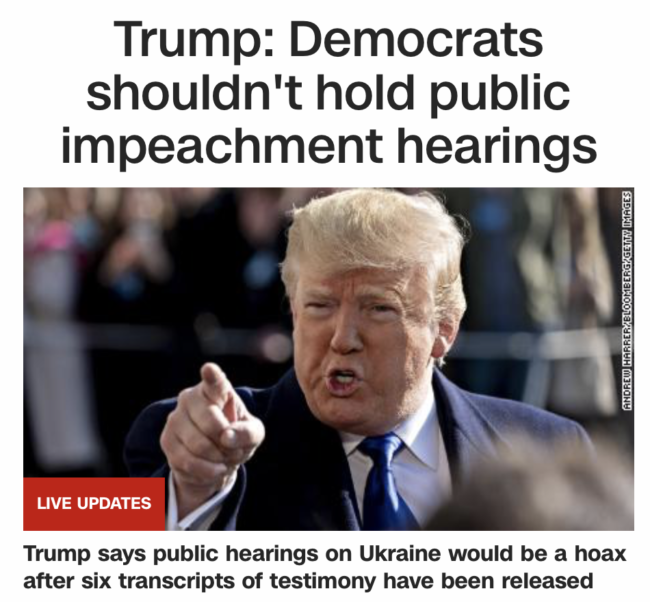 President Trump now says that Democrats should NOT hold public impeachment hearings after he and Republicans spent weeks bemoaning the fact that hearings were being done outside the public view. “They shouldn’t be having public hearings,” said Trump on Friday. “This is a hoax. This is just like the Russian witch hunt.”

None of this should be a surprise to anyone who has paid even a lick of attention to national news in the last couple of years. Republicans are continually sticking their necks out for a President who won’t even blink at doing something to contradict their every word. Congressman Ken Buck (R-Greeley), who moonlights as the State Republican Party Chair, ran into a similar problem just a few days after supporting the GOP’s SCIF Storming when it became clear that officials involved with Trump’s Ukraine dealings were confirming every bit of the whistleblower’s fears.

House Democrats had already effectively neutered the Republican’s “lack of transparency” strategy by agreeing to make everything public (on-camera testimony in House committees will begin next week). That hadn’t stopped the GOP from continuing with their attacks on the legitimacy of the “process” for impeachment discussions, but Democrats don’t really need to undermine the Republican strategy when President Trump will do it for them.