UPDATE #4: This publicity stunt has apparently been on the GOP calendar for at least a week, per CNN.

UPDATE #3: You knew this was coming:

17 pizzas arrived to serve the GOP mbrs still holed up in the House Intel Cmte, essentially blocking the deposition of Pentagon official Laura Cooper. GOP CO Rep Lamborn just arrived with what he described as “relief supplies” for the members: two large bags of Chick-fil-A

Rep. Doug Lamborn says it’s all the fault of those pesky brown women:

Schiff & Pelosi, who’ve given into the radical leftwing SQUAD, are holding their Faux Impeachment proceedings in secret because they know, if the facts are made public, the American people will see this inquiry for what it is, a sham.

Wherever there is Republican treachery afoot, you’ll find Rep. Lamborn with a bag of Chick-fil-A.

UPDATE #2: Rep. Ken Buck was reportedly not in the group that stormed the Sensitive Compartmented Information Facility (SCIF) in the basement of the Capitol today, but he was with them in spirit:

House Dems are conducting an impeachment inquiry in the basement of the Capitol behind closed doors & denying the GOP access to basic docs. If this was truly a ‘joint investigation’ then we would ALL have access to the same materials. #StoptheSchiffShow https://t.co/OsUxGEUVUw

This may seem like a technicality, but everyone in the intelligence community knows that intentionally bringing a cell phone into a SCIF is a serious violation. It could cost you your job and your clearance. https://t.co/gr9tblPt5z 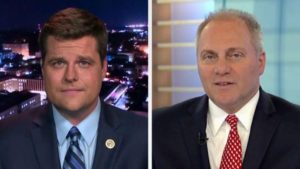 Politico reports, things got heated this morning on Capitol Hill as impeachment hearings against President Donald Trump continue to deliver a daily stream of damning information that Republicans really, really don’t want you to hear:

Dozens of House Republicans on Wednesday stormed the secure facility inside the Capitol where impeachment investigators have been deposing witnesses, forcing a delay to the proceedings…

According to people familiar with the matter, some GOP lawmakers brought their cell phones into the secure area — a significant violation of House rules. Another person said the room had to be fully swept for potential security breaches.

…The GOP-led stunt, led by House Minority Whip Steve Scalise (R-La.), comes as President Donald Trump has demanded that Republicans “get tough and fight” for him in the impeachment probe. But Republicans have struggled to defend Trump on the substance of the allegations against him, [Pols emphasis] and have instead focused on hammering Democrats over what they see as an illegitimate impeachment process.

We’re trying to get more information about Colorado members of Congress who may of participated in today’s confrontation (here’s looking at you, Doug Lamborn), but this incident represents a major escalation in the conflict over impeachment–signaling that the parliamentary rules that protect the impeachment process may be disregarded by the GOP. That would, fair to say, be a bad thing for the country.

Republicans who serve on the committee concede that Democrats are within their rights to depose witnesses in Congress’ secure basement hearing rooms, but the disruption Republicans successfully pulled off today is what will dominate the evening news–not the witness testimony, which turned explosive yesterday when acting ambassador to Ukraine Bill Taylor confirmed the damning substance of the case against Trump.

What happens next? We’ll have to wait and see– but the last “Brooks Brothers Riot” didn’t end well.