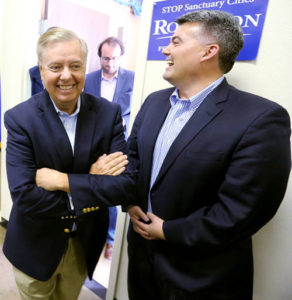 Profiles in courage? Not so much.

On Thursday, Graham introduced his ridiculous resolution in the Senate, criticizing House Democrats for the same impeachment proceedings that he helped conduct in 1999. As Dana Milbank writes for The Washington Post:

Twenty years ago, as a Clinton impeachment manager, Graham said a president’s failure to comply with subpoenas was impeachable because it “took the power from Congress.” Now the Trump administration is ignoring subpoenas wholesale — and Graham is attacking the lawmakers who issued them. [Pols emphasis]

In his Thursday news conference, Graham couldn’t quite bring himself to exonerate Trump: “I don’t want to comment on substance,” he said. “I’m not here to tell you that Donald Trump has done nothing wrong.” He merely raged against procedures, arguing, “The process in the House today, I think, is a danger to the future of the presidency.”

ABC News’s Terry Moran reminded him that during Watergate, lawmakers took depositions behind closed doors before there was an impeachment resolution, just as the House is doing now.

Graham did not dispute this.

Senate Republicans may be having a harder time defending President Trump’s conduct, but they’re apparently willing to die on the process hill.

As for Gardner…well, he’s nothing if not predictable.