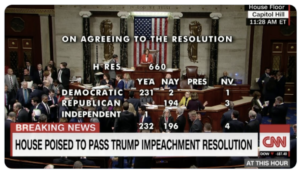 On Thursday the House of Representatives voted along party lines to formalize the process for impeachment proceedings against President Trump.

For weeks Republicans have railed against Democrats for not opening a “formal” impeachment inquiry — it was easier for Republicans to attack the process than to defend Trump on the merits of his actions — but on Thursday the GOP demonstrated that this argument was more style than substance. If Republicans can’t assail the process or defend the President’s decisions, then what’s left?

The only obvious step forward is to actually consider the case against President Trump and to vote accordingly. As the editorial board of the Aurora Sentinel wrote on Wednesday:

Credible, compelling, consistent and growing allegations against Trump extorting Ukraine for his own political gain have reached a tipping point…

…Trump himself has now offered honest Republicans a way out of having to defend an indefensible, lying, untrustworthy and incompetent president. Trump has admitted his “high crimes and misdemeanors.” Democrats are documenting them and making the unequivocal case for impeachment. Gardner and others can now finally step out from under the pressure to appease Trump’s misguided base of supporters. But to do that, they must commit to representing the voters in their district, not the delusional, fear-driven scheme of Republican Party leaders.

This is the way out for Gardner and other Republicans of becoming complicit with a duplicitous president. The nation is about to see Trump’s malevolent scandal exposed, and all voters will see which Republicans have the temerity to spurn or defend it.

The nation and history are watching what happens next. 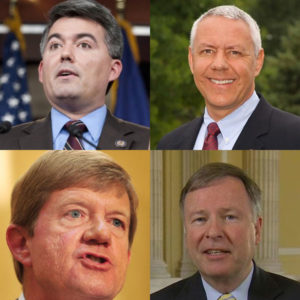 History does not yet appear to motivate Republican members of Colorado’s Congressional delegation. Instead, they appear more concerned about the present and how they will be perceived by Trump in 2020. Congressmen Scott Tipton (R-Cortez) and Doug Lamborn (R-Colorado Springs) are the co-chairs of Trump’s re-election campaign in Colorado; even if you could figure out a simple way to explain this to Lamborn, there’s little chance that he would bother to listen to the arguments. Congressman Ken Buck (R-Greeley)? He moonlights as the Chairman of the State Republican Party (or vice-versa) and has been clear about his loyalty to Trump.

As for Sen. Cory Gardner (R-Yuma)…well, Quid Pro Cory gave up any pretense of a conscience long ago. Gardner may not have a breaking point when it comes to Trump.

It seems clear that Colorado Republicans aren’t going to be moved by the present, but surely they can comprehend the impact impeachment proceedings may have on their own legacies. David Greenberg, a history professor at Rutgers University, examined this subject for The Washington Post:

Still, people return to this notion for a reason: It acknowledges the potentially high stakes of any political action — how a single vote or decision can loom large in someone’s legacy when the day of reckoning finally comes. It appeals to transcendent ideals that may be obscured by the fervor of the moment; sometimes these coalesce crisply over time, making right and wrong seem obvious and incontestable in retrospect. When, for example, a dying Sen. John McCain went to the well of the Senate to give his thumbs-down on the gutting of Obamacare, he knew this was an act he’d be remembered for…

…But the Watergate saga does tell us this much: Those loyalists who abandoned Nixon early, when it mattered — who stood up for principle over party, for integrity over professional advancement, before Nixon was politically doomed — are remembered and praised for their courage. [Pols emphasis]

And what of those who chose to stand with Nixon?

None of these men has been well remembered. All of their obituaries led with the fact that they defended Nixon. That decision became the headline of their entire lives. [Pols emphasis]

Wherever the impeachment inquiry leads, Tipton, Buck, Lamborn, and Gardner have shown no indication that they will do anything but march alongside Trump.

But there is never a wrong time to do the right thing.