Get More Smarter on Thursday (October 17)

You have 75 days left to fulfill your 2019 New Year’s resolutions. Now, let’s Get More Smarter. If you think we missed something important, please include the link in the comments below (here’s a good example). If you are more of an audio/visual learner, check out The Get More Smarter Show or The Get More Smarter Podcast. And don’t forget to find us Facebook and Twitter.

► It’s CYA time in the investigation into President Trump and his dealings with Ukraine. As the Washington Post reports:

The U.S. ambassador to the European Union, Gordon Sondland, told House impeachment investigators Thursday that President Trump outsourced the job of handling U.S. policy on Ukraine to his personal attorney Rudolph W. Giuliani, a decision that made Sondland uncomfortable but one he still carried out.

“I would not have recommended that Mr. Giuliani or any private citizen be involved in these foreign policy matters,” Sondland said, according to his prepared remarks obtained by The Washington Post.

Sondland, a major Trump donor who has became a focus of the impeachment inquiry due to his outsized role in U.S.-Ukraine policy, said in his remarks that he criticized the president’s handling of Ukraine policy, including the temporary hold on nearly $400 million in aid to the country and the recall of the former U.S. ambassador to Ukraine, Marie Yovanovitch. Sondland called her an “excellent diplomat” and said he “regretted” her departure, which followed a campaign by Giuliani to paint her as disloyal to the president.

Meanwhile, acting White House chief of staff Mick Mulvaney CONFIRMED to reporters that military aid was withheld from Ukraine on the orders of President Trump. From Politico:

Acting White House chief of staff Mick Mulvaney acknowledged Thursday that U.S. military funds to Ukraine were previously withheld at least in part because of a desire to have the Eastern European nation investigate unfounded allegations that foreign countries may have aided Democrats in the 2016 election.

“Did he also mention to me in [the] past the corruption related to the DNC server? Absolutely,” Mulvaney said of a conversation he had with President Donald Trump. “No question about that. But that’s it, and that’s why we held up the money.”

Leaving the closed Sondland deposition, Adam Schiff told us of Mulvaney’s comments: “I think Mr Mulvaney’s acknowledgement means that things have gone from very very bad to much much worse.”

He declined to answer further questions including whether he wants to speak to Mulvaney.

► What was that thing that President Trump was saying about corruption and nepotism? Anyway, here’s Eli Stokols of the Los Angeles Times:

President Trump intends to host next year’s G7 conference at his Doral International Resort in Miami in June, the White House confirmed Thursday, a controversial decision certain to raise conflict of interest questions given the financial benefit to Trump’s business.

Trump first floated the idea of the Doral in August at the G7 meeting in Biarritz, France, telling reporters that his property was far better than others his administration had considered, given its proximity to a major airport and the abundance of accommodations and meeting space on site.

“Each country can have their own villa, or their own bungalow,” he said.

The idea immediately generated controversy. Trump is already fighting two lawsuits suggesting that he is violating the Constitution’s emoluments clause, which prohibits U.S. office-holders from personally profiting from foreign governments.

But White House acting chief of staff Mick Mulvaney told reporters that the decision would not represent a conflict.

“The president has pretty much made it clear that he doesn’t profit,” Mulvaney said. The resort would host the foreign delegations for the G-7 conference “at cost,” he said, adding that the Doral was “far and away the best physical facility for this meeting.”

Don’t worry, though. White House acting chief of staff Mick Mulvaney told reporters that President Trump has “pretty much made it clear that he doesn’t profit” from this decision.

► Don’t miss the latest episode of The Get More Smarter Podcast, featuring an interview with Congressman Jason Crow (D-Aurora):

► Colorado Sen. Cory Gardner (R-Yuma) was a key vote in support of the Trump administration’s efforts to dismantle the Clean Power Plan.

► As Morning Consult explains, Sen. Cory Gardner (R-Yuma) is in BIG trouble in 2020:

According to Morning Consult’s latest quarterly Senator Approval Rankings based on nearly 534,000 responses from registered voters collected July 1 through Sept. 30, Republicans representing Colorado, Arizona, North Carolina, Maine and Iowa all saw their net approval — the share of voters who approve of a senator’s job performance minus the share who disapprove — decline between the second and third quarters of 2019…

…As split-ticket voting continues to decline, the latest rankings show Trump continues to be a drag on Republican incumbents. In Arizona, Colorado, Georgia, Iowa, Maine, North Carolina and Texas, Trump’s net approval with registered voters is worse than that of the incumbent Republican, by double digits in several cases.

Gardner is one of the 10 LEAST-popular Senators in the entire country.

► Colorado Republicans are tripping all over themselves trying to explain their position on Proposition DD, which would legalize sports betting in Colorado.

► Colorado Public Radio explains everything you need to know about Proposition CC, which is on the ballot in Colorado in 2019.

► The U.S. Supreme Court is being asked to take up the case of “faithless electors” in an Electoral College argument rooted in Colorado.

► Colorado Attorney General Phil Weiser thinks that Colorado Sheriffs who have voiced opposition to “red flag” laws will ultimately enforce the measure when it becomes a real situation in their community.

► President Trump may not be doing a lot of “winning” lately, but Russian President Vladimir Putin is sure running up the score.

► Congressman Elijah Cummings (D-Maryland) has died after battling an illness in recent weeks.

► Congressman Doug Lamborn (R-Colorado Springs) is demanding to be included in briefings that are not meant to include him, as Colorado Public Radio reports.

► President Trump sent an embarrassing letter to Turkish President Recep Tayyip Erdogan, which was reportedly tossed in the trash upon receipt. You don’t need to be a native English speaker to laugh at this ridiculous letter: 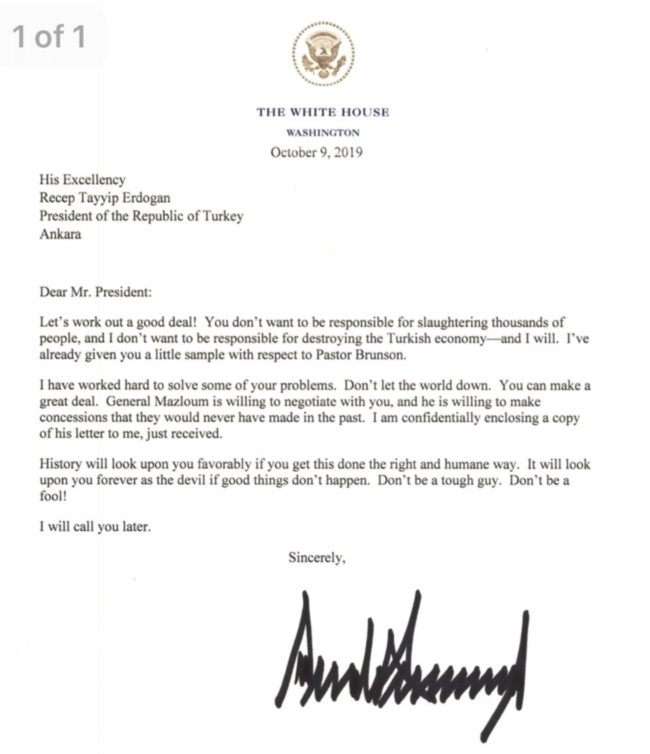 The original was written in crayon.

► Friday is the deadline for signatures to be submitted by an effort to recall Senate President Leroy Garcia.

► If there is an election in Colorado, it’s a good bet that Adams County is screwing something up with the balloting.

► One guy regularly quotes his “invisible friend.” Another has written numerous books on the Illuminati. These are the people who President Trump apparently looks to for policy guidance.

► Former Gov. John Hickenlooper is far and away the leader in the Democratic clubhouse when it comes to fundraising for the 2020 U.S. Senate race.