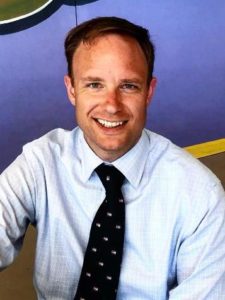 “Typical front ranger way of looking at things … you come up with something that is fake with the idea of defeating West Slope water projects so we are forced to send more water to the Front Range,” wrote Soper, who later deleted his own comment. “You people make me sick! You want to steal our water by denying us the ability to store water and use it.”

In an interview, Soper blamed his “late-night” response on anger, saying he also dislikes conservation easements.

“That got under my skin because not a dime will go to conservation easements,” Soper said. “The conservation are things like evaporation, like capping canals to prevent that evaporation, (or) getting rid of tamarisk trees. That’s conservation. We have 400,000 acre feet of water we’re trying to recover or save, and we have to come up with creative ways to do that. That’s called conservation.”

If you’re amused to see a Republican representative angry about misinformation after the outrageous falsehoods that drove this summer’s spate of failed recall attempts against Democratic lawmakers and Gov. Jared Polis, from fiction over Senate Bill 19-181 to just plain offensive nonsense about this year’s relatively minor update to the state’s sex-ed laws…well, we’re sympathetic to Rep. Matt Soper’s plight–but not sympathetic enough to forget that basically every Republican in Colorado has this coming.

With that said, thanks for correcting the record on Proposition DD.

Most of the attention on the 2019 Colorado ballot now arriving in mailboxes across the state is focused on Proposition CC, the referred measure to allow the state to keep and spend tax money collected in excess of the 1992 Taxpayer’s Bill of Rights arbitrary revenue growth cap–a provision in the law blamed for the state’s inability to, among other things, benefit from economic good times and planning ahead for fiscal “rainy days.”

But a second ballot measure, Proposition DD, implementing a 10% tax on newly legalized sports betting, nominally enjoys broad bipartisan support as a new revenue stream directed at Colorado’s substantial backlog of water conservation and storage projects. One of the chief Republican proponents of Proposition DD is none other than hard-right House Minority Leader Patrick Neville–and unfortunately for Neville, GOP legislative support for DD is causing him big headaches with both the rightmost nether reaches of the Republican base: 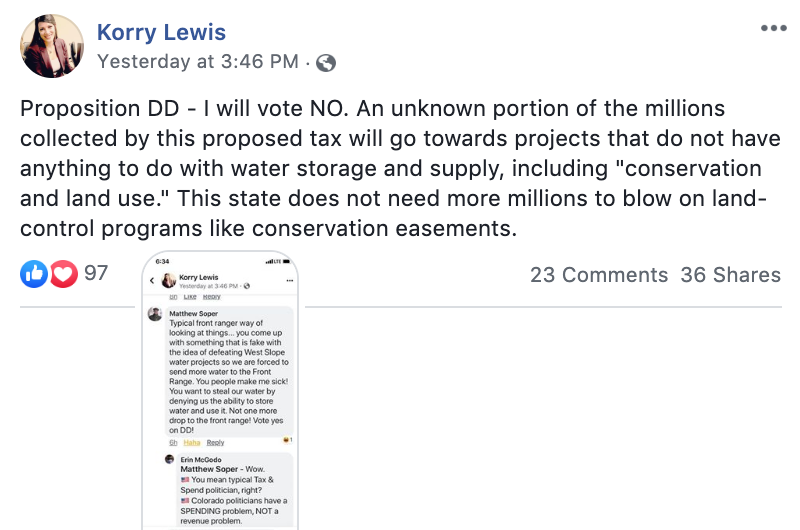 That’s GOP attorney Korry Lewis, daughter of Rep. Kimmi Lewis and a major player in the failed recall campaign against Gov. Jared Polis. Responding to her with an uncharacteristically vitriolic comment that was later deleted is Rep. Matt Soper, raging back at Lewis for allegedly supporting sending “more water to the Front Range. You people make me sick!” Soper says to Lewis, celebrating a new high point in Western Slope-Eastern Plains intra-GOP relations.

But gentle readers, it gets even better. Here’s Minority Leader Neville in the Denver Post this weekend, defending Proposition DD by committing what may by the worst of all cardinal sins for a Colorado Republican–disparaging TABOR!

The ballot question starts with the potential tax increase, as all tax questions must in Colorado. In this case, the question is: “Shall state taxes be increased by twenty-nine million dollars annually?”

But it’s not a tax on Coloradans, it’s a 10% tax on casinos. Sportsbooks would take a cut of each bet placed in person or through a mobile app, and this tax would be on a percentage of those earnings.

Now first of all, whether or not a tax is collected before or after the taxed transaction, it’s most certainly still a tax. For Republicans who have spent the last decade arguing that every miniscule change in the law that results in more money going into public coffers is a “tax increase”–which is also the principal argument being made by Republicans right now against Proposition CC–there’s absolutely no way to weasel out of this. It may be a tax on a vice that only voluntary participants would pay, but it’s absolutely a new tax, and excepting the segment of the voting public that views any new tax revenue as a violation of their oath to “starve the beast,” it should be okay to say so. But not to Pat Neville:

“It’s unfortunate the ballot language has to say that,” Neville said, adding that the wording might confuse some voters. [Pols emphasis]

And why, you ask, is the ballot language required to begin with the words “shall state taxes be increased by…” instead of other words that Neville thinks might more accurately describe what Proposition DD does? Article 10 of the Colorado Constitution, otherwise known as the Taxpayer’s Bill of Rights:

Understand this: GOP Minority Leader Patrick Neville thinks it’s “unfortunate” that TABOR requires ballot measures to be worded the way Proposition DD is worded–a provision that Republicans have repeatedly hailed as a key step toward “honesty” with the voters about tax increases. With that, Pat Neville has just validated every Democrat who has ever condemned the inflexible ballot language mandated by TABOR. It’s dangerously easy from there to arrive at the conclusion that TABOR was not authored by God via the hand of convicted felon tax cheat Doug Bruce after all.

We still expect Proposition DD to pass. But the far right may well feud on the back side for years to come.