There’s Hickenlooper, Then There’s Everyone Else

Democrat Andrew Romanoff filed his Q3 fundraising report just under the deadline on Tuesday, submitting his numbers at 11:32 pm (according to the FEC). Romanoff’s report — $503k raised and a total cash-on-hand (COH) amount of $725k — concludes the Q3 fundraising period for the 8 remaining Democratic U.S. Senate candidates.

The numbers speak for themselves: 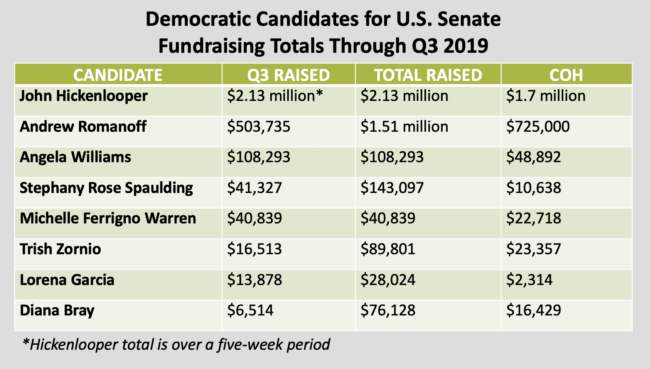 As you can see from the chart above, former Gov. John Hickenlooper is in a completely different stratosphere than the rest of the Democratic field. You could add up the total COH amounts for every candidate not named Hickenlooper — and then double that total — and you still wouldn’t reach the amount of money Hickenlooper has in the bank after just five weeks as a candidate for U.S. Senate.

Only Romanoff is anywhere near Hickenlooper’s fundraising figures (the rest of the field could barely combine to run a competitive STATE Senate race), yet Hickenlooper more than quadrupled Romanoff’s returns in a matter of weeks. The writing is on the wall regardless of whether Romanoff chooses to read the words himself. After about nine months as a U.S. Senate candidate, Romanoff is consistently turning in fundraising quarters that would be solid for a competitive Congressional race.

You know how often a candidate ends up winning an election after being exponentially outraised by an opponent? About as regularly as incumbent Sen. Cory Gardner (R-Yuma) gives an honest answer to a question. Can it be done? Sure. Is it likely to happen? Nope.

As we’ve said many times in this space, campaign fundraising is about much more than just paying staffers and keeping the lights on — it’s a barometer of the candidate’s appeal. People generally give money to campaigns that they think have the best chance of winning; it’s human nature to support the strongest perceived candidate. In the first congressional district, for example, weak fundraising was a clear sign for Crisanta Duran that her challenge of incumbent Rep. Diana DeGette (D-Denver) wasn’t going anywhere. DeGette wasn’t knocking it out of the park on the fundraising front, but by comparison she was well ahead of her challenger.

You don’t need a crystal ball to see that Hickenlooper is clearly the candidate best equipped to defeat Gardner, who raised $2.45 million in Q3 and is sitting on a warchest of $6.7 million. If beating Gardner is the primary concern for Democrats in 2020, then Hickenlooper is unquestionably the right opponent. If it’s about something else…well, that’s a question only Romanoff can answer.