Senator Cory Gardner (R-Yuma) is widely considered to be among the most endangered incumbents facing re-election in 2020. In early December, we wondered aloud in this space about how long it would take before Gardner changed course from his increasingly Trump-loving, GOP leadership-having positions into a pretend “moderate” who is theoretically more capable of winning a second term.

Well, if you picked “January 3” in your office pool for the beginning of the backpedal, you may claim your winnings. As The Hill reports:

Sen. Cory Gardner (R-Colo.), who faces a potentially tough re-election in 2020, says Congress should re-open the federal government, even without a deal on funding President Trump’s border wall.

Gardner is the first Senate Republican to call for ending the partial shutdown even without a deal on President Trump’s demand for $5 billion to fund a border wall.

“I think we should pass a continuing resolution to get the government back open. The Senate has done it last Congress, we should do it again today,” he said…

…Senate Majority Leader Mitch McConnell (R-Ky.) says he will not schedule a vote on a clean stop-gap funding measure to re-open federal agencies without prior sign-off from the president. 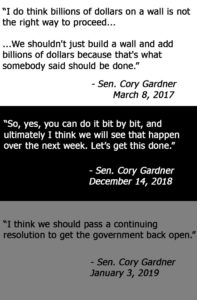 Gardner has already publicly reversed himself on the idea of a border wall, but openly calling for an end to the government shutdown without a conversation about a giant wall is a different move — though a completely obvious and expected one for a politician known for saying whatever, whenever. In fact, Jason Salzman of the Colorado Times Recorder previewed this exact scenario just this morning.

Republicans completely own the current government shutdown because President Trump already said it would be his fault. Americans took that message to heart and aren’t buying Trump’s attempts to deflect blame, which makes the shutdown an unquestioned political problem for Republicans like Gardner.

Gardner sees an opportunity here to cast himself as a problem-solving moderate, but these are still just empty words from Colorado’s junior senator. Would Gardner push Senate Majority Leader Mitch McConnell to hold a vote on reopening the government without Trump’s big wall money? Would he support a veto override if Trump refuses to budge? If not, then none of these words matter.

At some point, Gardner is going to need to back up his rhetoric with action. Otherwise, he risks becoming another Jeff Flake — talking loud, saying nothing, and without an office to call his own.