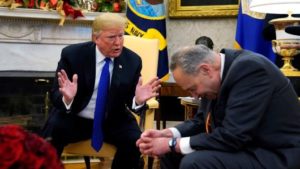 Fun times all around today in the Oval Office

President Trump, House Minority Leader Nancy Pelosi and Senate Minority Leader Charles E. Schumer clashed Tuesday over funding for the border wall, an explosive Oval Office encounter that ended with Trump declaring he’d be proud to shut down the government to get what he wants.

The stunning public spat, during which Schumer accused the president of throwing a “temper tantrum,” ended with no resolution and appeared to increase the chances of a partial government shutdown at the end of next week.

The three leaders pointed fingers, raised their voices and interrupted each other repeatedly as they fought over policy and politics.

Trump claimed that, because she is working to nail down the votes to become speaker, “Nancy’s in a siutation where it’s not easy for her to talk right now.”

Pelosi answered: “Please don’t characterize the strength that I bring to this meeting.”

“I will take the mantle. I will be the one to shut it down.”

The Washington Post has the full annotated conversation. The entire exchange is fascinating, but it’s hard not to laugh at Trump’s ridiculous rhetoric about building a border wall with Mexico:

One thing that I do have to say is tremendous amounts of wall have already been built, and a lot of wall when you include the renovation of existing fences and walls renovated a tremendous amount, and we’ve done a lot of work. In San Diego we’re building new walls right now. And we’ve — right next to San Diego, we’ve completed a major section of wall, and it’s really worked well. So a lot of wall has been built. We don’t talk about that, but we might as well start because it’s being built right now. Big sections of wall. And we will continue that. And one way or the other it’s going to get built.

Earlier today, Trump also “threatened” that the U.S. military would “build the remaining sections of the wall” with all of the extra billions of dollars they have (not to mention the extra time):

….People do not yet realize how much of the Wall, including really effective renovation, has already been built. If the Democrats do not give us the votes to secure our Country, the Military will build the remaining sections of the Wall. They know how important it is!

So, yeah. The President of the United States of America, ladies and gentlemen.