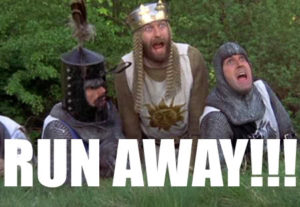 It was just one week ago that President Trump threatened to shut down the federal government over funding for his mythical border wall in an acrimonious White House meeting with Democratic leaders. Trump pounded his chest in front of Senate Minority Leader Chuck Schumer and likely incoming House Speaker Nancy Pelosi, saying this in regard to a looming shutdown: “I will take the mantle. I will be the one to shut it down.”

President Trump on Tuesday retreated from his demand that Congress give him $5 billion to build a wall along the U.S.-Mexico border, backing down amid acrimonious GOP infighting that left him with few options four days ahead of a partial government shutdown.

The news, delivered by White House press secretary Sarah Sanders in an interview on Fox News, represented a major shift from Trump’s declaration last week that he would be “proud” to shut down the government to get the money he wanted for his border wall.

Democrats, who will reclaim the majority in the House just weeks from now, have consistently refused to give Trump anywhere near the $5 billion he wants.

But Sanders told Fox News Channel: “We have other ways that we can get to that $5 billion.”

Sanders said the White House was exploring other funding sources and believed it could be legally done.

If this is at all surprising to you, then you really haven’t been paying attention for the last two years. Despite his frequent claims that he is the best negotiator to ever negotiate things, Trump regularly backs himself into a corner — like he did last week — leaving no other logical option but to abandon his silly threats.