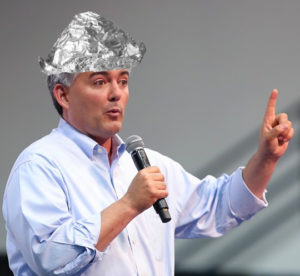 As Politico’s Ashley Gold reports, Republicans are pushing a not-really-new conspiracy theory among their more persuadable base members that major social media platforms like Twitter and Facebook are systemically biased against conservatives:

Republicans are turning their grievances about biased tech companies into a rallying message for a difficult election year.

House Majority Leader Kevin McCarthy and RNC Chairwoman Ronna McDaniel are among the GOP leaders vocally complaining about a host of Silicon Valley slights against conservatives, ranging from Facebook’s stripping of ad revenue from the video-blogging duo Diamond and Silk to a Google search result that paired the California GOP with “Nazism.”

…Conservative complaints about Silicon Valley have sprouted in the past year, echoing the frequent GOP accusations that a liberal news media and a pervasive bureaucratic “deep state” are conspiring against Trump’s agenda. But the anti-tech message appears to be accelerating as Republicans fight to fire up their base and counter a feared Democratic “blue wave” in November.

Meanwhile, tech executives are scrambling to prove they don’t harbor anti-conservative prejudice. Facebook has held at least two previously unreported meetings with conservative groups and digital experts since April, and it launched an audit of potential bias with the assistance of former Arizona Republican Sen. Jon Kyl and the law firm Covington & Burling.

Ever since social media networks were exploited by actors foreign and domestic to spread disinformation intended to disrupt the 2016 elections and support Donald Trump’s scorched-earth bid for the presidency, the big social media players have taken steps to crack down on both blatantly false content circulating on their platforms and foreign nationals using social media advertising to post election messages. It’s important to note that both sides in politics at least nominally support this kind of action.

But of course, the other side of this coin is inevitably going to be distrust in the “Silicon Valley liberals” who run these companies, not coincidentally by the same low-information social media users who were most susceptible to “fake news” to begin with. That the flavor of disinformation being targeted is almost all conservative-leaning disinformation doesn’t sit well with conservatives who never stopped believing.

The problem is, those are the same voters Republicans desperately need at the polls in November! So every Republican, even the “smart” ones who “know better,” is obliged to pander to the conspiracy theories:

Sorry, did you really think Cory Gardner was above this? Recall how in Gardner’s 2014 campaign for the U.S. Senate, Gardner shamelessly exploited baseless fears of an Ebola outbreak in the United States, a lie later singled out by Politifact as 2014’s Lie of the Year. Despite Gardner’s carefully crafted image as a grownup Republican, he manages to subsidize the worst misinformation of any given election cycle–and somehow gets away with it.

Let us be the ones to assure Sen. Gardner and anyone else reading: Facebook is not out to get conservatives. Also, some of the stuff you believe is crazy stupid Russian propaganda and that is not Facebook’s fault.

We don’t expect to convince anybody, but for the record.