From Pulitzer Prize-winning fact-checker Politifact–no shortage of lies on the campaign trail in 2014, but here's what they chose as the biggest whopper of this almost-concluded midterm election year:

[Since the first Ebola case in America], more Americans — at least nine, and likely many more — have died from the flu.

Yet fear of the disease stretched to every corner of America this fall, stoked by exaggerated claims from politicians and pundits. They said Ebola was easy to catch, that illegal immigrants may be carrying the virus across the southern border, that it was all part of a government or corporate conspiracy.

The claims — all wrong — distorted the debate about a serious public health issue. Together, they earn our Lie of the Year for 2014…

When combined, the claims edged the nation toward panic. Governors fought Washington over the federal response. The Centers for Disease Control and Prevention stumbled to explain details about transmission of the virus and its own prevention measures. American universities turned away people from Africa, whether they were near the outbreak or not. 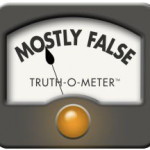 Here in Colorado, the chief promoter of Ebola as a campaign issue this fall was GOP U.S. Senate candidate Cory Gardner. In October, Gardner's claims about the federal government's response to the Ebola outbreak were slammed by the very same Politifact:

Gardner said the CDC is "spending money on things like jazzercise, urban gardening and massage therapy" that could be redirected [to] Ebola.

We weren’t able to document such expenditures, but given the agency’s spending parameters, it’s certainly possible they’ve been made. However, by cherry-picking three chuckle- (or outrage-) inducing spending items, Gardner presents a misleading description of what the fund does. Those efforts almost certainly represent a tiny fraction of spending from the prevention fund, which is dominated by efforts to attack diseases that kill more than 1.4 million people every year, rather than one so far with Ebola.

The claim contains some element of truth but ignores critical facts that would give a different impression, so we rate it Mostly False.

Gardner used the debate to criticize Obama for his response to Ebola and calling for a travel ban.

“If the president’s not willing to put into place a travel ban, then we should have 100 percent screening of the people who are coming from those affected areas,” Gardner said at the debate.

The administration’s screening plan for flights from West Africa will miss 2,000 to 3,000 people from Ebola-affected countries a year, Rep. Cory Gardner pointed out during the hearing.

The CDC is taking the temperatures of travelers from West Africa at five international airports, but that will capture just 94 percent of incoming passengers from affected countries.

Gardner announced on FOX News on October 16th that the Ebola scare is all Obama's fault:

GARDNER: Well, I don't understand why the White House, why the CDC is opposed to a travel ban.

In fact, if you listen to the excuses the CDC director gave today, he said, we can't do it because of personnel and supplies. When I asked what number of flights, personnel and supplies were entering the area from the U.S., he said he didn't know. So, how can he oppose a travel ban on something that he doesn't even know the answer to?

But not to worry, Gardner continued:

I think we have to make sure that we're not — we're not frightening the American people. This is a very serious situation…

Without question, the outbreak of deadly Ebola virus in West Africa this year is a very serious public health crisis with impacts throughout the world. With that said, the nature of Ebola's communicability limits its ability to spread when properly dealt with by trained and well-equipped medical personnel. The ill-informed panic over Ebola that gripped the nation just weeks before the elections contributed to a climate of fear–that Republicans like Cory Gardner eagerly sought to exploit for electoral gain, even as they insisted they weren't.

Did Ebola scare tactics win the election for Cory Gardner? Not on their own, of course.

But Gardner willingness to go there speaks volumes–especially now that we know how wrong it was.