FRIDAY UPDATE: Rep. Cory Gardner on CNN's Crossfire last night, Stephanie Cutter grilled him on his claims of a massive premium increase for a "comparable" plan to his current $650 per month family policy:

We wish Cutter had zeroed in on Gardner's claim about his "100 percent increase" right at the end–he mentioned his current $650 monthly premium, but it doesn't get explored before Rep. Keith Ellison interjected with discussion of rates in Minnesota. Cutter does point out that rates in Gardner's district for a family policy, especially once subsidies are factored, are distantly below the figure Gardner claims he must now pay for "comparable" coverage to his current plan. Nobody we've talked to has been able to reconcile Gardner's shocking claim of well over a 150% increase, mostly because Gardner hasn't supplied enough information about either his existing plan or its supposed replacement to make that possible.

But as the Colorado Independent's Mike Littwin opines today, that might not be the point.

It would be nice if reporters would make Gardner prove what he's asserting and nobody can reconcile, but even if they don't, his claims will be validated by his constituents as the Affordable Care Act takes effect, or proven false by them. We wouldn't wish the horror story Gardner describes on anybody, but it just doesn't add up. What's more the ACA is having lots of positive effects right now that his constituents can see with their own eyes.

Whichever way it comes out, we hope the truth about Gardner's health insurance claims gets as much attention as Gardner is getting right now with his insistence that the sky is falling. Original post follows. 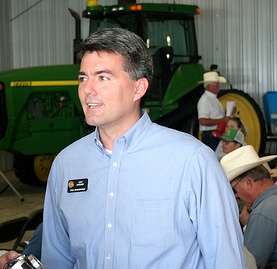 The latest cause célèbre in the debate over the Affordable Care Act, a.k.a. "Obamacare," concerns a dramatic claim being made by GOP Rep. Cory Gardner about his own family's health insurance. As the Colorado Independent reports:

Colorado Republican Congressman Cory Gardner has been railing against the law since before it passed. Two days ago, he wrote an op-ed for the Colorado Springs Gazette about how he never accepted federal employee health benefits when he went to Washington in 2010 and now his family’s private insurance plan has been cancelled because of “the myriad new regulations, requirements and mandates of the president’s health care law.” Gardner doesn’t offer any details about the provider or the plan nor any specifics on why it got canceled. He wrote that, if he decides to stick with his provider, he’ll have to pay more. He doesn’t say whether he can now find a better plan at a lower rate somewhere else or if he’s even tried. Righty blogger Michelle Malkin reported yesterday that Gardner is carrying the policy cancelation letter around with him as a prop…

When I was elected to Congress, I chose not to enroll in the Federal Employee Health Benefits program that is available to Members of Congress and their staffs. Instead, I purchased insurance from the private market because I wanted to be enrolled in the same health insurance network that all Coloradans have access to. It's the same type of plan that many of my friends and neighbors in Yuma and across Colorado have…

Recent analysis has shown that average premiums in Colorado for the individual market will increase between 23 and 25 percent. Moreover, premiums are expected to increase by 17 percent in the small group market. After my current plan is discontinued, the closest comparable plan through our current provider will cost over 100 percent more, going from roughly $650 a month to $1,480 per month. [Pols emphasis]

Let's unpack the things we know and don't know about Gardner's claim that his insurance premium will increase from $650 per month to nearly $1,500 per month. Talking with health insurance experts–who we'll disclose do support Obamacare–the first thing they question is the strikingly low figure for Gardner's "existing" insurance relative to what he claims he'll have to pay for an "equivalent." According to this study from the Kaiser Family Foundation, the 2013 average for an employer-based family health insurance total premium is over $16,300 per year. With that in mind, Gardner's current $650 monthly non-group premium for his family of four could be considered abnormally low–and that's before we learn any details about coverage, deductibles, and other considerations that Gardner has not bothered to disclose.

And that's where Gardner's grandiose claim of this massive increase gets really dubious. Was Gardner's old health insurance a high deductible "catastrophic" insurance plan? Did it not include some (or any) of the "essential health benefits" mandated by the Affordable Care Act, such as lab tests or mental health services? We don't know any of those details, but for determining the truth behind Gardner's allegation, those details are absolutely vital.

Gardner makes much of a claim by Barack Obama during the debate over health care reform that people could "keep" their existing plans. In the text of the law, this refers to "grandfathered" plans that existed before March 23, 2010, and they have to provide enough coverage (no lifetime caps, coverage of children until age 26, etc.). If they don't? Well, they're part of the problem we're solving with health care reform, and that's why better plans are about to be made available through the exchange. What's more, a large percentage of Gardner's constituents are going to get help paying for insurance bought through the exchange–admittedly not Gardner, whose congressional salary of $174,000 per year makes him ineligible for help. For more on benefits of Obamacare in Gardner's district, read this.

Bottom line: In Gardner's op-ed, he quotes "estimates" from sources unknown that premiums "individual market will increase between 23 and 25 percent." The Congressional Budget Office originally estimated more in the neighborhood of 10-13%, and that's before the subsidies for an estimated 57% of policyholders kick in. Some newer studies indicate the predicted rates of increase under Obamacare have been wildly overblown. Above all, no one can show us any rational figures that reconcile with Gardner's claim of an over 100% increase for the "closest comparable" plan. Until Gardner is willing to open the proverbial books and show precisely what the apples-to-apples differences are between his existing plan and his "equivalent" new one, we're just not buying any of this–and reporters need to ask Gardner for the proof.