Another Petition Gathering Scandal for Republicans

UPDATE: Mitt Romney’s Nephew issues a stern statement based on the Denver7 report:

“If these allegations against Walker Stapleton’s circulators are even half true, they call into question the validity of thousands of petitions submitted by the Stapleton campaign.

There is the right way to gather petitions, and there’s the illegal way. Ryan Luby’s piece shows that Stapleton’s signatures were gathered illegally, with total disregard and disrespect for state law. Not only is this unfair to the candidates who collected signatures legally and with the proper circulators, but it’s a gross breach of trust with Colorado voters, who rely on petition gatherers to be trustworthy conduits for their political voice.

I strongly urge the Secretary of State’s office to investigate who actually circulated these petitions, and just how many of them were circulated in violation of Colorado law. As Republicans, we have to demand the same integrity in our primary process as we do in the General Election. Colorado voters should be able to have full faith in their election process from start to finish, and the Stapleton campaign has undermined that trust with their underhanded tactics and lazy behavior.” 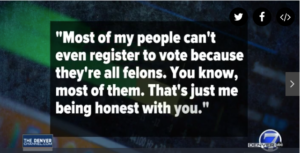 It was right about this time two years ago when the Republican race for the U.S. Senate nomination began to spiral into a signature-gathering scandal that became a top story for weeks and ultimately led to the demise of Jon Keyser, the GOP’s great hope for defeating incumbent Sen. Michael Bennet (D-Denver) in 2016.

While Keyser eventually made it onto the Primary ballot after a protracted legal battle, the avalanche of negative press from his shady signature-gathering process crippled his campaign…though not before birthing one of the greatest political interviews in Colorado history (and a national award for then-Denver7 reporter Marshall Zelinger). The petition fiasco even prompted new legislation designed to mitigate some of these problems in the future, which will forever be known as “Keyser’s Law.”

You might think that Republicans in Colorado would have learned a lesson from that 2016 disaster, but as Ryan Luby reports for Denver7…maybe not:

A secret recording has had the Colorado Secretary of State’s Office and the Denver7 Investigates team questioning if people paid to collect signatures for Colorado political candidates are following the law. 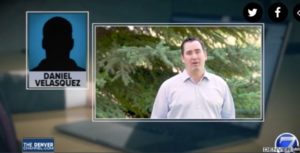 Ruh-roh. Dustin Olson, co-founder of the petition-gathering firm “Signature Gathering Company” (which includes Mitt Romney’s Nephew as a client), apparently recorded an interview with a “self-identified signature gatherer” who claims to have been collecting signatures for Walker Stapleton’s gubernatorial campaign:

“Most of my people can’t even register to vote because they’re all felons. You know, most of them,” the man, who identified himself as “Daniel Velasquez,” said in the call, which Denver7 Investigates reviewed. “That’s just me being honest with you. If you want to work with me, you’re going to get those [signature] numbers, you’re going to work with a whole bunch of rowdy individuals. You know, a whole bunch of rowdy individuals from the hood.”…

…Velasquez said in the call he’s from Florida, but also said he’s a Colorado resident and registered Republican. He also said he was collecting signatures for, at the very least, the Walker Stapleton gubernatorial campaign in Pueblo. However, Colorado voter data does not show any Daniel Velasquez registered as a Republican in Colorado. [Pols emphasis]

Furthermore, and equally as concerning, is that Velasquez told Olson he wants to work in a “lenient” workplace.

“You’ll let me do almost whatever I want as long as I turn in, you know, papers,” Velasquez told Olson. “Because as far as I’m concerned … we’re all just trying to make money out here.”

According to Denver7, the Secretary of State’s (SOS) office has been investigating this case and has yet to find evidence of a “Daniel Velasquez” submitting petition signatures, though Velasquez says on the recording that he “has someone else helping him clear legal hurdles” in the process.

The full Denver7 story is well worth watching for more details on these allegations, as well as a potentially-critical nugget near the end of the report:

For instance, people registered to vote at a Quality Inn in Pueblo on the exact same day in January. Though there isn’t a “Daniel Velasquez” on that list, there are 9 people altogether — all registered as Republicans.  All their registrations later became inactive because government mail sent to them bounced back.

This certainly feels like a thread worth pulling. Much like the fiasco in the 2016 U.S. Senate race, this could be only the beginning of a bigger problem for Republican candidates running for statewide office.