The failure of Colorado Republicans to field a credible challenger to incumbent Democratic Sen. Michael Bennet in 2016, as we’ve discussed, was an historic missed opportunity–in what we now know was a much stronger election for Republican candidates across the nation than anyone (other than Vladimir Putin, apparently) could have predicted. Republican U.S. Senate nominee Darryl Glenn finished within six points of Bennet, where he had been expected to lose by double digits, and it is mathematically possible that a better-qualified Republican candidate could have rode that unexpectedly closer margin a few more points to victory.

But it didn’t happen, and the series of events that destroyed the candidate openly favored by the National Republican Senatorial Committee (NRSC) in the GOP U.S. Senate primary in May of 2016 may well be the reason why Bennet is still a U.S. Senator. On January 11th, 2016, first-term state Rep. Jon Keyser announced his resignation from the the legislature to focus on running for the U.S. Senate. Keyser, an attorney and a decorated combat veteran, had by this point already impressed kingmakers in Washington, D.C. sufficiently to obtain potentially field-clearing tacit support in a primary field of generally minor candidates.

Keyser made what turned out to be a fateful decision to qualify for the ballot via petition instead of going through the Republican Party’s caucus process, which is how eventual primary victor Darryl Glenn qualified for the ballot in dramatic fashion at the party’s state assembly. But the petition process proved troublesome, not just for Keyser but for three candidates–who ultimately had to sue to get on the ballot, arguing that basic democratic rights trumped technicalities about the signatures and petition gatherers employed by the campaign. In the end, Keyser was on the ballot, and for his powerful supporters that was all that was needed.

That is, until Denver7 investigative reporter Marshall Zelinger started knocking on doors.

Here is the explanation for how fraudulent petition signatures were discovered in Jon Keyser’s petitions as we can best explain it: the petition signature forms turned in to support candidates seeking a spot on the ballot are a public record, and were made available in both electronic summary form as well as the original documents available for inspection in the Secretary of State’s office. Electronic spreadsheets for the petitioning candidates revealed that the Secretary of State had committed an error, and allowed a few dozen voters to sign petitions in support of two candidates. Most of these duplicates were filtered out in the tally, but for whatever reason these few signatures were not.

One of the voters whose signature was mistakenly allowed twice was Pamela Niemczyk of Littleton. 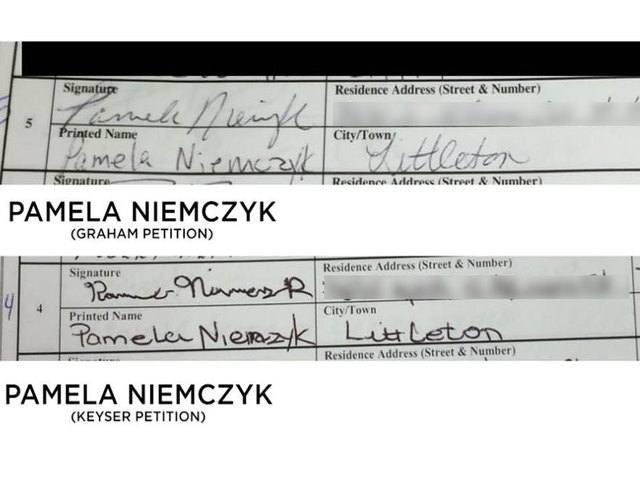 A visual inspection of these two original petition forms, which could only be obtained in person at the Secretary of State’s office at the time, revealed that these two forms were not signed by the same person.

One of them was a forgery.

Provided with this information by a liberal activist group responsible for the initial discovery, Zelinger first confirmed with Niemczyk that “her” signature on Keyser’s petition was forged, then he set to work contacting other Republican voters on Keyser’s petitions whose signatures looked suspiciously like the forged Niemczyk signature.

The story instantly exploded into headlines as Denver criminal investigators set to work on the case. Keyser’s campaign responded first with open derision for Zelinger and the lefty usual suspects who discovered the initial forgery, then fell silent after Zelinger reported that he had confirmed many more fraudulent signatures and questions grew as to whether Keyser had qualified for the ballot arithmetically via fraud.

After over a week of hiding out while the fraud revelations deepened, Keyser finally appeared at a Senate candidate forum. Keyser’s responses to questions about his forged petition signatures at this forum will go down as one of the greatest meltdowns in the history of electoral politics–the kind of thing poli sci majors will cite and recite for decades to come as the textbook self-immolation of one’s political career.

Jon Keyser: immortalized by those four words, “I’m on the ballot.”

Oh, and did you know that Jon Keyser has a dog? Why, “he’s bigger than you!”

By the end of the day, Keyser was a national celebrity in the worst. Possible. Way.

Once Keyser’s absurd and disastrous response to the petition fraud scandal became an even bigger story than the criminal investigation, Keyser’s once-promising backers were done. Keyser suddenly had trouble raising cash, barely putting together a token media buy and increasingly relying on wild rhetoric to move the needle in a race that had completely abandoned him. Jon Keyser, who began 2016 as the brightest hope for Colorado Republicans to repeat Cory Gardner’s 2014 triumph, placed 4th out of 5 candidates in the June 28th primary–beating out only perennial also-ran Ryan Frazier.

Today, this former rising Colorado politics star is a resident of the state of Wisconsin, having quietly taken a job as legal counsel with motorcycle manufacturer Harley-Davidson. The petition gatherer employed by the campaign through a contractor has pled guilty to a felony count and awaits sentencing.

The Keyser campaign’s petition fraud scandal revealed failures at multiple points in the candidate petition process, from signature gathering contractors who allowed someone they suspected of forgery to continue working to the Secretary of State’s office very questionably missing warnings from tally workers of possible fraud. Most outside the direct working of the process had no idea that petition signatures were not subjected to the same kind of verification that signatures on ballots receive, and we expect all of these revealed flaws to get attention in the upcoming legislative session.

There is a tendency in the aftermath of this story to blame the rascally liberals for initially discovering the petition fraud, or to attack Denver7’s Marshall Zelinger for his supposed “harassment” of Keyser that led to Keyser’s ill-fated bluster about the size of his dog. Both of those scapegoats ignore the obvious failure of both Keyser’s campaign infrastructure and Keyser personally under pressure to respond to this crisis. Without a doubt a better response was possible, and might well have helped Keyser recover from the situation even belatedly. Zelinger’s actions investigating this story were of course perfectly appropriate, except for his intrepid journalism being, you know, disastrous for Jon Keyser.