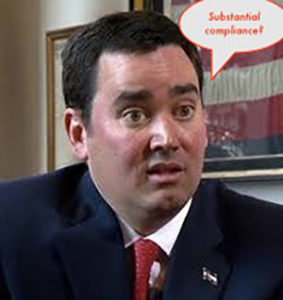 Does Walker Stapleton have enough petition signatures to make the Republican Primary ballot for Governor?

We mentioned this briefly on Tuesday in a story about the gubernatorial candidacy of Republican Barry Farah, but it’s worth revisiting as the days drag on without word from the Secretary of State’s (SOS) office. Stapleton started talking about participating in the party caucus/assembly process soon after he was the first Republican gubernatorial candidate to submit petitions for ballot access, perhaps out of concern that he might not have enough valid signatures.

Consider: Stapleton submitted 21,000 signatures to the SOS office on February 23, just two days after Democrat Michael Johnston became the first candidate for Governor to turn in nominating petitions. On March 16, Johnston learned that he had qualified for the Democratic ballot, but just barely — Johnston’s petitions only carried a 56% validity rate. Johnston also submitted 1,500 more signatures than Stapleton, so the Republican has less of a margin for error.

Today is March 23, and there is still no indication from the SOS that Stapleton has qualified for the June Primary ballot (candidate petitions are supposed to be checked in the order they were received, so Stapleton’s numbers theoretically could have been ready earlier this week). Several candidates for state legislative seats learned today that they had gathered enough signatures for ballot access, but not Stapleton.

Of course, Stapleton could still make the primary ballot through the assembly process, but it would be a significant blow to his frontrunner status if he isn’t able to qualify by petition alone. Stapleton’s campaign has no shortage of money thanks to his Bush family ties, so failing to make the ballot through the petition process would be an indication of mismanagement rather than a lack of resources. Farah’s surprise entry into the GOP field is no doubt related — at least somewhat — to unease in Stapleton’s campaign; Farah wouldn’t likely have jumped into the race so late if he didn’t have some indication that the GOP frontrunner was beatable.