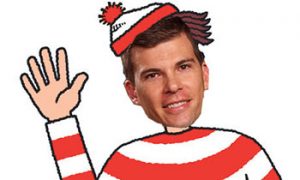 This is a pretty astounding admission from the Senate campaign of Republican Jon Keyser. As Brandon Rittiman reports for 9News:

As the results come out in Tuesday’s GOP primary for US Senate, all but one of the five candidates will hold election night parties for their campaign supporters.

Former state legislator Jon Keyser will take the quieter option of watching election returns “at home with his wife and kids,” according to campaign spokesman Matt Connelly.

To political observers, it’s an obvious sign that his campaign is in bad shape.

“That’s a really bad sign,” said 9NEWS Republican expert Kelly Maher. “The only reason to not have an event is if you have some information that doesn’t point to a favorable outcome.” [Pols emphasis]

It’s certainly an unusual move. Even when candidates expect to lose badly, they tend to hold events on election nights to thank donors and volunteers for their support.

It’s not much of a surprise to learn that not even Jon Keyser thinks Jon Keyser is going to win the GOP Senate nomination on Tuesday, but hiding in your house on Election Night is damn near unprecedented. We can’t recall the last time we heard that a candidate for a major statewide office was completely forgoing any sort of election night event; even Scott McInnis had an election-night party after it was obvious that he was going to lose the 2010 GOP gubernatorial Primary to Dan Maes.

Republican commentator Kelly Maher, once a big cheerleader for Keyser, put the final nail in Keyser’s coffin with her quote for 9News that all but declares the campaign dead. This isn’t just an embarrassing loss for Keyser — this is an embarrassment for the entire Republican establishment that tried to invent Keyser as a candidate for U.S. Senate.

Keyser was a tough-talking candidate when it came to his military service and his shameful attempts to browbeat reporters. Taking the coward’s way out on Tuesday sums up Keyser better than any attack ad could have spun things, and it may very well end whatever could have remained of his political career.