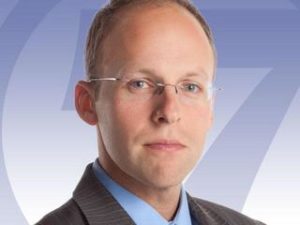 Today, the University of Southern California’s Annenberg School for Communication and Journalism announced the winners of the prestigious Walter Cronkite Awards for Excellence in Television Political Journalism. A couple of familiar Colorado reporters made the roster, including Marshall Zelinger (formerly of Denver7 now with 9NEWS) and his breaking of arguably the biggest Colorado political story of 2016:

At the awards event in 2005, Cronkite warned that “it’s going to be, to a large degree, up to us in television and radio, in broadcasting” to equip Americans “to perform the act of intelligently selecting our leaders…. If we fail at that, our democracy, our republic is, I think, in serious danger.” Announcing the winners, USC Annenberg Professor and Lear Center Director Marty Kaplan said, “Today, at this seriously dangerous moment for our democracy, these Cronkite Awards honor journalists, stations and networks stepping up to their civic responsibility to tell Americans the truth.”

The trophies will be presented at the National Press Club in Washington, D.C., on Friday, April 28 at an invitation-only ceremony. For more information, including the winning entry videos, visit www.cronkiteaward.org…

• Marshall Zelinger and KMGH-TV, Denver, CO, the Scripps-owned ABC affiliate, are recognized for breaking the story of a signature forgery scandal that rocked a U.S. Senate race. His dogged research tracking down voters whose signatures were forged, as well as finding the forgery suspect, triggered an official investigation and eventual policy change. Zelinger, now at KUSA, showed “the impact that journalism can have on politics.”

The discovery of forged signatures in GOP U.S. Senate frontrunner Jon Keyser’s ballot petitions upended the race against incumbent Democratic Sen. Michael Bennet, and was the largest single factor ensuring that a qualified candidate did not emerge from the Republican primary. To prove the extensive fraud in Keyser’s petitions was a very tall order for a local news journalist, but Zelinger’s persistence in tracking down the truth–and steely nerve confronting Keyser with the evidence–was a factor that no one was counting on. Not only did Zelinger uncover fraud, he proved over the frantic objections of Keyser’s many defenders that the facts can still trump a favored candidate’s ambition.

In doing so, Zelinger struck a blow for more than just good journalism. It was nothing short of a win for truth, justice, and the American way–and Zelinger’s career deserves the upswing this award is likely to give him.

Congratulations also to 9NEWS’ Brandon Rittiman, honored with a Cronkite of his own for his generally excellent Trust Test series of political fact-checks. For as much as we complain about what’s wrong with local political journalism, here are a couple fine examples of what’s working.