Gardner, GOP Senate a Picture of Anger and Frustration

President Donald Trump told Republican senators on Wednesday that they shouldn’t leave town for August recess without repealing and replacing Obamacare, a point he stressed at least three times.

“People are hurting. Inaction is not an option,” Trump said during a lunch with Senate Republicans at the White House. “And, frankly, I don’t think we should leave town unless we have a health insurance plan, unless we can give our people great health care. Because we’re close. We’re very close.”

Despite the president’s expression of optimism, Republican senators aren’t close to repealing and replacing Obamacare, as they’ve promised to do for years.

Trump also tossed around some vague threats, particularly toward Nevada Sen. Dean Heller. Given the fact that Senate Republicans have all but ignored Trump on healthcare reform to this point, it’s hard to see how today’s luncheon will make much of a difference. 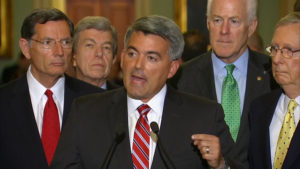 Sen. Cory Gardner and his fellow angry men on Tuesday

Colorado Sen. Cory Gardner (R-Yuma) is lunching at the White House today with his fellow Republican Senators. It is a bitter, angry bunch that will meet with a bitter, angry President Trump. As CNN reports:

The GOP turned into the Grouchy Old Party, as recriminations flew after the failure this week to repeal and replace Obamacare — the greatest motivating cause of Republican voters for more than seven years.

Soon after Senate Majority Leader Mitch McConnell admitted defeat Tuesday in his bid to jam the bill through the Senate, President Donald Trump, different factions on Capitol Hill and outside conservative activists started assigning fault for the legislation’s collapse.

Trump, facing criticism of his own conduct in the failed effort to replace his successor’s signature law, suggested simply that the Republican majority on Capitol Hill was not up to the job…

…Meet the 53 angriest people in town. One President who wants to sign something that repeals Obamacare, and 52 Republican senators who can’t agree on how to advance health care legislation without tearing the GOP apart.

Republicans will have a chance to air their frustrations Wednesday as all GOP senators have been invited to 1600 Pennsylvania Avenue for lunch, a White House official told CNN. Discussing health care is on the menu, and given the way lawmakers were speaking Tuesday, expect some blame to be doled out as well.

The anger in Washington is acute, not just because overturning Obamacare has become a holy grail for Republicans, but also because six months into the Trump era, while operating a monopoly on power on Capitol Hill, the party has yet to pass a landmark piece of legislation.

Sometimes the greatest frustrations in life come from the realization that there is no-one else to blame for your own failure. That frustration grows larger when you understand that everyone else sees the same thing.

President Trump and Cory Gardner can make feeble attempts to drag Democrats into their healthcare failure, but it’s common knowledge that Republicans control both chambers of Congress and the White House. This spin attempt is even more absurd given the news that Trump apparently had no idea what was happening when the Senate was throwing in the towel on repealing Obamacare. Senate Republicans failed to make any headway on overhauling healthcare because they crafted terrible legislation that would have caused massive harm to tens of millions of Americans. Gardner knows this, which is why he takes the ridiculous approach of insisting that he was undecided on a bill despite standing next to Senate Majority Leader Mitch McConnell and expressing anger over the legislation’s failure.

As the New York Times explains:

The Senate bill, which faced a near-impossible path forward after the House passed its version of the legislation in May, was ultimately defeated by deep divisions within the party, a lack of a viable health care alternative and a president who, one staff member said, was growing bored in selling the bill and often undermined the best-laid plans of his aides with a quip or a tweet…

…Making matters worse for the White House, the bill had virtually no support from health care, insurance, patient advocate and disease groups, and was harshly judged by the Congressional Budget Office. Grass-roots opposition to the bill — aided by Democrats like Senator Chuck Schumer of New York — swayed members of Congress in a way rarely seen on Capitol Hill.

Outside of the echo chamber that surrounds Republican Senators, nobody was clamoring for a healthcare bill that would have destroyed protections for pre-existing conditions and made devastating cuts to a Medicaid program that is used by 1 in 5 Americans. As we wrote last month, Republicans didn’t have a messaging problem; they had a math problem.

This entire process badly exposed Cory Gardner as nothing more than a political bomb-thrower with a complete indifference for his constituents and the American public in general. Gardner is a virtuoso at throwing wrenches at Democrats and railing against the policies of the opposing party; indeed, his entire Congressional career is based on complaining about Democrats and Obamacare specifically. But if you ask Gardner to try to craft some legislative solutions — some real, tangible policy ideas — he vanishes into the bushes behind a long string of meaningless phrases.

Perhaps this is the true reason that Gardner hasn’t held a town-hall meeting in nearly 500 days. Gardner’s staff didn’t want to expose the Senator to images of constituents expressing real-life concerns about the GOP’s flawed healthcare proposals because Gardner couldn’t just stand there and smile in response. Gardner’s gibberish on healthcare isn’t fooling anyone — including the local media — which leaves him in a very unfamiliar position.

All of the anger, all of the frustration — this is the real face of Cory Gardner. This is the face of a man who knows that he can no longer smile his way around the truth.