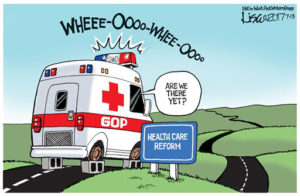 If you missed the breaking news late last evening, Trumpcare is dead. The Better Care Reconciliation Act (BCRA) is kaput. Senate Republicans have failed, again, to even get a healthcare bill to the floor.

Even conservative news outlets like RedState are giving eulogies for Trumpcare. As the New York Times examines:

The announcement by the senators, Mike Lee of Utah and Jerry Moran of Kansas, left their leaders at least two votes short of the number needed to begin debate on their bill to dismantle the health law. Two other Republican senators, Rand Paul of Kentucky and Susan Collins of Maine, had already said they would not support a procedural step to begin debate.

With four solid votes against the bill, Republican leaders now have two options.

They can try to rewrite it in a way that can secure 50 Republican votes, a seeming impossibility at this point, given the complaints by the defecting senators. Or they can work with Democrats on a narrower measure to fix the flaws in the Affordable Care Act that both parties acknowledge.

Senator Mitch McConnell, the Republican leader, conceded Monday night that “the effort to repeal and immediately replace the failure of Obamacare will not be successful.” He outlined plans to vote now on a measure to repeal the Affordable Care Act, with it taking effect later. That has almost no chance to pass, however, since it could leave millions without insurance and leave insurance markets in turmoil. [Pols emphasis]

Trying to repeal Obamacare without a replacement in place is an even worse idea than Trumpcare — even Colorado Sen. Cory Gardner (R-Yuma) has said as much — but Senate Republicans might try to do it anyway. This isn’t like the poor loser on the playground taking his ball and going home; this is the poor loser taking his ball and then returning with heavy machinery to raze the field to the ground.

President Trump predicted Tuesday morning that Republicans may wait for the federal insurance market to collapse and then work to broker a deal to rewrite the nation’s landmark health-care law.

In a series of tweets, Trump blamed the demise of a months-long effort to rewrite the Affordable Care Act on Democrats “and a few Republicans,” but he suggested that the drive to overhaul the law was not completely over…

…Senate Majority Leader Mitch McConnell (R-Ky.) opened the Senate on Tuesday morning touting his latest plan — to vote on a pure repeal, with a two-year delay, by taking up the House’s health-care bill. But while conservatives and Trump have been pushing for such a repeal as a last resort, it appeared unlikely that the vote would succeed.

Blaming Democrats for the failure of Trumpcare is transparently silly, of course. Republicans hold majorities in both chambers of Congress and have one of their own in the White House; they didn’t need Democrats to pass anything, and they still failed.

It seems unlikely that the Senate will be able to muster any sort of support to pursue a repeal-only plan, though there may be some scuttlebutt about this in the days and weeks to come. It is certainly a huge blow to Republicans to fail — repeatedly — to make any headway on Obamacare after spending seven years complaining about it, but in the end a few cooler heads in the GOP prevailed and prevented what would have been a complete disaster for most Americans. Republicans never seemed to understand a fundamental problem with their entire approach to healthcare: You can’t base an entire policy strategy on taking things away from people.

The immediate aftermath for Republicans will be a soul-searching look at how and why they weren’t able to make any headway on Trumpcare or BCRA. It didn’t help that President Trump was absolutely clueless about healthcare policy in general. As Chris Cillizza of CNN explains in a story worth reading in its entirety, Republicans face some very tough realities today:

Talk to any Republican privately and they will tell you that there are simply no good options to turn this legislative lemon into lemonade. Below are seven hard realities Republicans need to face in the aftermath of this epic collapse…

1) There is no other, better bill, 2) “Repeal then replace” isn’t likely to go anywhere, 3) McConnell wants this to go away, 4) House Republicans who voted for healthcare are WAY out on a limb, 5) Obama leaving office was the worst thing to happen for repeal/replace advocates, 6) Delaying the vote was a total killer, 7) Trump never had any real idea about the policy.

At the end of the day, the only thing Republicans really accomplished with this healthcare fiasco is to prove to the American people that they are heartlessly inept. This one’s gonna sting for awhile.