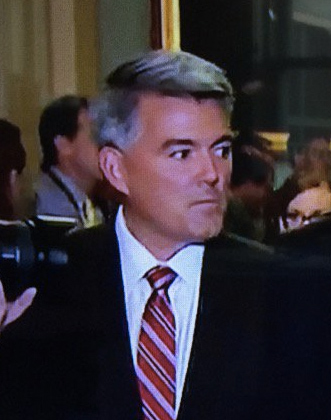 Two stories up this afternoon from Denver TV political reporters bracket Sen. Cory Gardner with terrible coverage in the wake of the failure this week of the latest version of “Trumpcare,” legislation to repeal and replace the 2010 Affordable Care Act–and not just the more detailed Trumpcare plan, but now a fallback proposal to simple repeal Obamacare with no defined replacement appears to lack the support needed to move forward as well. This latest round of failures by Republicans to enact their campaign promise to repeal the ACA is by far the most politically damaging yet, leaving a party in total control of the legislative and executive branches looking like a pack of incompetent buffoons in the most charitable analysis. At worst, six years of scare tactics, legislative stonewalling, and self-fulfilling prophecy of doom and destruction has been exposed as a lie.

As 9NEWS’ Brandon Rittiman reports today, Gardner’s newfound vagueness on a bill he purportedly helped create doesn’t fit with his years of votes to repeal Obamacare–votes with no provision whatsoever for the Medicaid patients Gardner more recently claimed he wanted to protect. Votes that Gardner can’t make go away:

He never said how he planned to vote on the Senate’s healthcare bill before it died — even though he was on a small group of senators working on it. [Pols emphasis]

“Senator Gardner was still reviewing the legislation … ,” spokesperson Casey Contres told 9NEWS Tuesday afternoon. “He was actually scheduled to meet with [Centers for Medicare and Medicaid Services] Administrator Seema Verma today to discuss several aspects of the bill and its impact on Colorado.”

Ah, but the context! The context:

The first vote he had on it in Congress came in 2011 when he voted for full repeal in the U.S. House of Representatives, promising that month “to get to work on legislation replacing the President’s healthcare law.”

That was six years ago.

Fast forward past a bunch more house votes against the Affordable Care Act to 2015. Gardner’s first year in the Senate.

On Dec. 3, Gardner voted with Senate Republicans to repeal Obamacare without replacement. When then President Barack Obama vetoed the bill, Gardner issued a statement saying Obama “chose politics over policy.”

But in 2016, the politics changed for Gardner…

The long history of the GOP-controlled Congress voting for wholesale repeal of the Affordable Care Act, with no “glide path” or any other meaningful consideration made for the millions of Americans who would either lose or never obtain coverage, makes it impossible for Republicans who made those votes to credibly cast themselves as defenders of the people they previously didn’t care to defend. The difference of course is that the legislation they are voting on might actually become law now, but that doesn’t change the fact that Republican politicians like Cory Gardner won elections on the promise to undo the Affordable Care Act. And they voted to do just that over and over.

“There are a lot of people out there today who seem to be spiking the football, trying to celebrate a moment that, for now, seems to leave the Affordable Care Act in place for today,” Gardner said…

Gardner, who voted in the Senate in 2015 to repeal Obamacare and send the bill to President Barack Obama’s desk (Obama vetoed the bill), also spent much of his time in the U.S. House of Representatives pushing for an Obamacare repeal and voting for any repeal measures when they came up. [Pols emphasis]

…Gardner used the football analogy multiple times in his brief on-camera statement to reinforce his displeasure with the bills’ failures because of a handful of his Republican colleagues and all of his Democratic colleagues.

So to summarize, Gardner was either undecided about the legislation, or he’s really mad at Democrats and Republicans who came out against it and are now “spiking the football!” The difference seems to be how you ask the question. Or maybe who’s asking. Either way, both of these stories return to the central fact that Gardner has been on the side of repealing the Affordable Care Act from the beginning, and that means the failure of the GOP as a whole to repeal it, with or without a replacement, is Gardner’s personal failure too. Gardner has nothing to show for any alleged attempts to soften the blow of repeal, having abandoned the Medicaid population he once claimed to support.

All Gardner has is a broken promise, and no one left to buy his excuses.