Get More Smarter on Thursday (July 6) 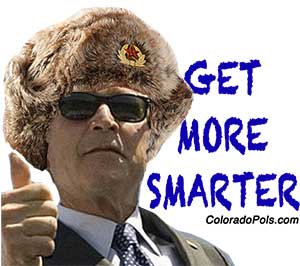 Today is National Fried Chicken Day; this is a pretty good Colorado-related marketing stunt. It’s time to Get More Smarter. If you think we missed something important, please include the link in the comments below (here’s a good example). If you are more of a visual learner, check out The Get More Smarter Show.

► President Trump is continuing his nationalist and anti-media rhetoric in Europe this week ahead of the Group of 20 Summit of world leaders in Hamburg, Germany. The New York Times sums up Trump’s talk in Warsaw, Poland with a single paragraph:

At a news conference with President Andrzej Duda of Poland earlier in the day, Mr. Trump broke with his own intelligence agencies by saying he was not convinced that Russia was solely behind the hacking in the 2016 presidential election; he repeated a warning to North Korea after its missile test; and he once again denounced what he called “fake news.”

Poland’s first lady is taking over the Internet thanks to her handshake snub of Trump.

► How low can the polls go? The only thing with more downward momentum than Trumpcare is the public opinion of Republicans involved with the healthcare debacle. Here in Colorado, Sen. Cory Gardner’s (R-Yuma) approval ratings have sunk to 27%, largely because voters really don’t like the healthcare proposals championed by Congressional Republicans. Gardner’s numbers have been plummeting in recent months, which is no surprise when you consider that only 50% of Republican voters in Colorado approve of the Senate’s approach to healthcare legislation.

Of course, Gardner’s approval ratings are also going to keep falling the longer he remains hidden away from his constituents.

► Colorado Secretary of State Wayne Williams is taking a lot of heat over his decision to comply with requests from the Trump administration to turn over election-related data from Colorado. It doesn’t help Williams’ cause when you consider that 41 other states have refused the request from the Trump administration, citing a refusal to play along with Trump’s unfounded claims of massive election fraud. A good number of these denials are coming from solid red states. The Denver Post breaks down the particulars of this controversy and what it means for Colorado voters.

► Shave and a haircut? Two bits. Campaign for Governor? Whatever.

► Democratic Attorney General candidate Phil Weiser raised a ton of money in the second quarter — a record amount for an AG candidate at this stage of a campaign.

► The director of the independent Office of Government Ethics is resigning six months ahead of the end of his term.

► Texas Sen. Ted Cruz has a healthcare plan that analysts say would likely destroy the insurance market altogether. From CNN:

Maine Senator Susan Collins told Bloomberg News last week that she feared it would weaken consumer protections and hurt those with pre-existing conditions.

Health policy experts agree, saying it would split the individual market in two. Healthier people would gravitate to the non-Obamacare plans since they don’t need — and don’t want to pay for — a sweeping set of benefits.

That would leave all the sicker consumers clustered in the Obamacare plans, which would send premiums skyrocketing. That would likely drive out all but the most seriously ill, which would push rates even higher, possibly prompting some insurers to leave.

“If there were a Joy of Cooking for insurance, this would be the perfect recipe for destabilizing the market and turning the marketplaces into high-risk pools,” said Larry Levitt, senior vice president at the Kaiser Family Foundation.

Elsewhere in healthcare, Politico points out that healthcare legislation being pushed by Senate Republicans would do little more than just shift costs around to other places.

► Senate Republican talking points on healthcare are getting very strange in general:

► President Trump is shaking his fist at North Korea once again.

► Democrat Joe Neguse is racking up endorsements as he campaigns for Congress in CD-2 (Boulder-ish).

► There won’t be any statewide ballot measures in 2017, but things are already looking crowded for 2018.

► Firefighters are battling a wildfire near Breckenridge.

► The Denver Post editorial board encourages Coloradans to go forth and CORA stuff.

► Is there a bigger asshole in Colorado than Doug Bruce? In the words of Colorado Springs Police Chief Pete Carey: “[your] complete lack of care, concern and compassion for anyone but yourself fits perfectly with your obnoxious and bullying personality.”