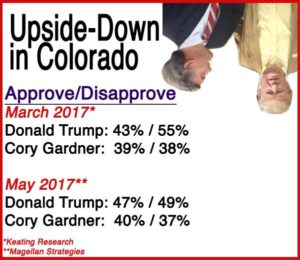 Magellan Strategies, a Colorado-based polling firm that is known to lean-Republican, released a fresh new batch of polling numbers in Colorado today. For Republicans hoping to see better results after an awful Keating Research poll in March…

Well, let’s just say that things are looking up — but only because Republican numbers are essentially upside-down.

Magellan Strategies polled 502 “likely 2018 General Election voters in Colorado” on April 26 and 27, and the results are pretty dismal for Republicans. Take a look at some of the “key findings” as presented by Magellan:

♦ Among all respondents, 34% approve of the job the Republicans in Congress are doing and 58% disapprove.

President Trump’s approval ratings are definitely upside-down in Colorado. Senator Cory Gardner (R-Yuma) is right on the precipice of being flipped on his head, but remember here that Magellan Strategies generally tilts rightward in its poll results.

There are a lot of reasons why Gardner is losing favor among voters, including Republicans, and it starts with his disinterest in speaking with constituents. It doesn’t help that Gardner is getting splinters in his pants from regularly riding the fence on issues while he bends over backward to show deference to Trump on subjects that are supposed to be right in his wheelhouse.

The only good news for Trump and Gardner is that they won’t have to appear again on a Colorado ballot until 2020. But for Republicans campaigning in 2018, these numbers must be absolutely terrifying.