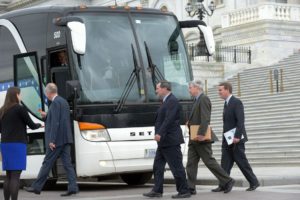 Colorado Senator Michael Bennet (far right) boards a bus for a field trip to the White House on Wednesday. Most forgot to pack their lunches.

The U.S. Senate took a field trip to the White House on Wednesday for a “policy briefing” on North Korea that was really just a poorly-disguised photo op for President Trump to convince Americans — on the eve of his first 100 days in office — that he really does do Presidential stuff from time to time. As CNN reports:

It was quite the spectacle.

…Ostensibly the reason for the trip was a classified briefing on the growing threat posed by North Korea and its quest for nuclear weapons. Secretary of State Rex Tillerson, Director of National Intelligence Dan Coats, Defense Secretary James Mattis and Gen. Joseph Dunford, the chairman of the Joint Chiefs of Staff, led the briefing. (The quartet later briefed House members — on Capitol Hill.)…

…Trump, of course, is far from the only president (or politician) to stage a photo op. It happens all the time. But rarely do you see US senators used as the scenery the way they were on Wednesday.

As with most field trips, it appears that Wednesday’s “Day at the White House” was not much of a learning experience:

“We learned nothing you couldn’t read in the newspaper,” Oregon Sen. Jeff Merkley told CNN’s Erin Burnett Wednesday night. “It felt more like a dog-and-pony show to me than anything else,” Illinois Sen. Tammy Duckworth told CNN’s Anderson Cooper. “I guess it has something to do with this 100 days in office.”

Meanwhile, Senator Cory Gardner (R-Yuma) put on his “Trump Toady” outfit in an effort to spin Wednesday’s spectacle into something more than just political theater (President Trump himself spent just a few minutes at the big meeting). From Peter Roper of the Pueblo Chieftain:

“I came out of the classified briefing with a pragmatic but sober realization that we face a significant threat from North Korea but we are changing course and are going to put more pressure on that regime,” the Republican senator said.

Gardner chairs a Senate subcommittee on East Asia and has become an often-quoted authority on North Korea. [Pols emphasis]

Go back and read those two sentences one more time. Gardner is an “often-quoted authority on North Korea” who chairs a Senate subcommittee on East Asia, but he would like you to believe that Wednesday’s meeting at the White House brought him to the “sober realization” that North Korea is a problem. Denver7 has a separate story citing fellow Senators Marco Rubio and Jeff Flake talking up Gardner as the Senate’s “go-to person” on North Korea.

If Gardner is truly an authority on North Korea, then Wednesday’s meeting at the White House was complete nonsense and a waste of the Senate’s time. Or…Gardner doesn’t really know much about North Korea and needed yesterday’s field trip to learn about the dangers of Kim Jong Un. It’s one or the other here.