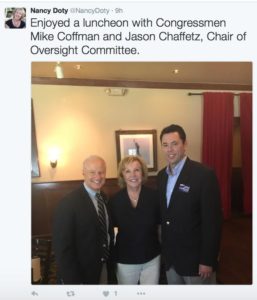 We’ve written on numerous occasions in this space about the problems Republican politicians are facing with Donald Trump as the GOP nominee for President. Trump has demonstrated over the last year that he has the ability to engage and retain a loyal base of followers; he has millions of diehard supporters who view Trump as the leader of the Republican Party and don’t hide their anger at other Republicans who refuse to back the GOP Presidential nominee.

Many Republican candidates have increasingly felt compelled to distance themselves from the Big Orange guy at the top of the ticket, with differing levels of commitment. The exodus reached its peak earlier this month following numerous sexual assault allegations against Trump; for Republicans such as Rep. Mike Coffman (R-Aurora), Trump’s abhorrent diatribes about women were (sorta) the last straw. After waiting so long to take a clear position regarding support for Trump, politicians such as Coffman have had a hard time putting the Trump question behind them.

Enter Utah Rep. Jason Chaffetz. As the Washington Post reports, Coffman had better get ready to answer new questions about his non-support of Trump:

Nineteen days ago, Rep. Jason Chaffetz (R-Utah) was so over Donald Trump.

“I’m out. I can no longer in good conscience endorse this person for president,” Chaffetz said the day after The Washington Post revealed Trump’s 2005 “Access Hollywood” tape. The breaking point, Chaffetz went onto say, was that he couldn’t look his 15-year-old daughter in the eye and talk about what the GOP presidential nominee said: “It is some of the most abhorrent and offensive comments that you can possibly imagine.”

On Wednesday night, Chaffetz abruptly un-un-endorsed Trump, Tweeting this horrible mealy-mouthed explanation. Chaffetz now says he plans to vote Trump for President but won’t “defend or endorse” the GOP nominee, as though there is some sort of difference to be made here. The hypocrisy couldn’t have been more transparently disgusting, but Chaffetz is apparently  more concerned about increasing his power on Capitol Hill than defending his own integrity. Chaffetz could have just voted for Trump and not announced his decision to switch gears, but that could have been a problem for his not-too-distant-future aspirations of becoming the primary thorn in the side of another President Clinton.

Chaffetz’s bizarre reversal on Trump definitely isn’t helpful to fellow Republicans such as Coffman. You might recall that Coffman hemmed and hawed and ducked and dodged for months on Trump before calling on Trump to drop out of the race for President in early October. Coffman’s Trump Dump was a convoluted mess — his spokesperson ended up furiously calling reporters the next morning to confirm that Coffman was definitely absolutely positively not voting for Trump — and it was impossible not to compare Coffman’s squirreliness with what (at the time) were pretty straightforward comments from Chaffetz. But now that Chaffetz has walked back his anti-Trump comments, reporters are once again compelled to ask other Republicans — including Coffman — if they do indeed still oppose Trump or if they have consulted a thesaurus for a different explanation.

Chaffetz may have brought the Trump support question back to life, but it didn’t take much; this was something that remained idling in the background for Republicans such as Coffman who have struggled to convince voters that they really, truly, probably, certainly don’t back Trump for President.

There are just 12 days remaining until Election Day, and while it is becoming clear that Trump doesn’t have the support to make it to the Oval Office, he remains perhaps the most important singular figure among diehard conservative voters. If endangered Republicans such as Coffman are to survive in 2016, they will need to somehow maintain a balance of keeping the support of Trump loyalists while not losing voters who are convinced that Trump is unfit to become President. This is not a topic that Coffman wants to continue to discuss, but thanks to Rep. Chaffetz, he’s not going to have much of a choice.