Colorado GOP Chairmen Then And Now Respond To Trump 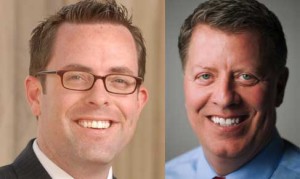 As Republicans across the nation continue to grapple with the explosive controversies that have rocked GOP presidential nominee Donald Trump since the beginning of October, a story in Politico today has responses to the scandal from both the current and immediate former Colorado Republican Party chairmen.

The difference in their responses, we think, speaks volumes:

Colorado GOP Chairman Steve House said he rejected the assault claims out of hand because they originated in The New York Times. [Pols emphasis]

Compare that to ex-GOP chairman Ryan Call, ousted by House in a post-2014 “Tea Party” insurgency:

Former Colorado GOP Chairman Ryan Call said he was consumed by a feeling of overwhelming sadness for his party when he heard news of the allegations on the radio while driving home Wednesday evening.

“I’m hearing this from many, many Republican women, including spouses of longtime party leaders and elected officials who are really conflicted about voting for Trump,” he said.

Call worried the allegations swirling around Trump could leave a permanent stain on the Republican Party’s identity.

“A lot of good conservatives in my church are just saying they can’t pull the lever, check the box, in support of a man who engages in this sort of behavior,” he said, adding, “I feel very conflicted, I have been for some time, in part because of these allegations.

“For me, it’s a real tragedy, because this is the greatest country in the world,” he said. “Our race for president is headed headlong into the gutter.”

Longtime readers will remember how Ryan Call spoke out against numerous ugly statements and actions by hard-right Colorado Republicans during his term as chairman of the Colorado GOP. Call is the one who denounced Sen. Vicki Marble’s rambling blather about “the black diet” in a hearing on health care policy, and Call opposed the recall of Democratic Colorado Senators in 2013 because he knew the movement was empowering the worst actors of the Colorado GOP coalition. Call was rewarded for his candor with House’s successful challenge for his job.

When the dust settles from the insanity of the 2016 elections, only one of these men will be on the right side of history. And we’re inclined to think it will be the one Colorado Republicans sent packing over a year ago.