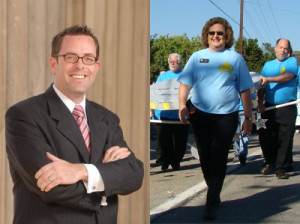 But, with Democrats now clinging to just a one-seat senate majority, the proposed recall election targeting Sen. Evie Hudak of Westminster isn’t about her gun votes or anything else she’s done — activists already tried and failed to gather enough signatures to recall her earlier this year.

And it risks blunting the political headwinds that many Republicans, following the recalls, finally feel building at their backs on the cusp of another big election year.

“The job of the Republican Party is to get Republicans elected when there are regular elections,” said Colorado GOP Chairman Ryan Call. “And there are already a lot of things competing for our time, attention and resources.

“This recall election would undermine our efforts in the governor’s race, the U.S. Senate race and to win a senate majority if voters perceive that Republicans are trying to win a majority through recalls.” [Pols emphasis]

Call's reasoning is quite valid, and just one of a number of reasons that have been expressed to us that the latest campaign to recall Sen. Evie Hudak may, as attractive as it may seem on the surface, amounts to a "bridge too far" for Colorado Republicans. After the gun lobby extracted their pound of flesh from Democrats by successfully ousting Sens. John Morse and Angela Giron, another recall would be about the partisan power play of retaking the state Senate rather than a legitimate grassroots issue-based campaign. Moreover, the biggest advantage Republicans enjoyed in the recent recall elections, and would again in any future recall process as it exists today in Colorado is the ability to prevent the normal delivery of mail ballots. This is due, as the state just came to understand, to a 1912 constitutional provision for recalls that gives much more time for candidates to petition on to the ballot than other elections. This makes delivery of mail ballots logistically impossible.

In short, that means Republicans are gaming the system to suppress the vote in every one of these recalls, and that looks bad. It's more than Call's suggestion that it would be bad for voters to "perceive" that Republicans are "trying to win a majority through recalls." It's at least as dubious that they would be doing so by taking advantage of an arcane state constitutional loophole to reduce turnout.

Call is washing his hands of this recall because it looks bad. It looks gratuitous, blatantly partisan, and manipulative. Now, it may be that Republicans will decide not to care about the optics. But, and we'll leave it to our readers to discuss why, that will be over the objections of their party's state chairman.