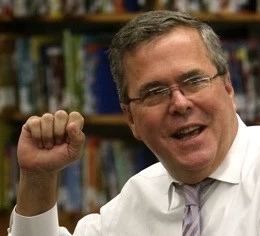 Hot off of insulting immigrant families, today Jeb turned his scattershot firepower back to women’s health at a town hall in Englewood, Colorado.

“I don’t think Planned Parenthood ought to get a penny because they’re not actually doing women’s health issues,” Jeb said. [Pols emphasis]

Planned Parenthood Action Fund, as you can expect, was ready to call BS on the assertion that they don’t provide care for women’s health issues besides abortion services–with ample statistics:

“It’s clear Jeb Bush shouldn’t be making health care decisions for anyone — just look at what he did to women’s health in Florida. However this does beg the question — if providing millions of women each year with birth control, breast exams and pregnancy tests and more doesn’t count as women’s health in Jeb Bush’s world, what does?”

Planned Parenthood is one of the nation’s most trusted providers of high-quality, affordable reproductive health care for women, men, and young people. In 2013, Planned Parenthood’s nearly 700 nonprofit health centers provided a total of 10,590,433 services, including:

While the group gets a large amount of attention for abortion services, Planned Parenthood says such services make up 3 percent of the health care it provides, according to its latest annual report. The clinics also provide preventive health services, such as breast and cervical cancer screenings, as well as testing and treatment for sexually transmitted diseases.

Tuesday was not the first time Bush has drawn criticism for comments regarding Planned Parenthood. He remarked last month that he was “not sure we need half a billion dollars in funding for women’s health programs” writ large.

And that, dear reader, is how you take an issue that’s a no-brainer with your base of support and turn it into a liability. Now, the story isn’t about Jeb! engaging in the popular, even obligative Republican pastime of beating up on Planned Parenthood.

The story is how Jeb! still can’t get his facts straight.